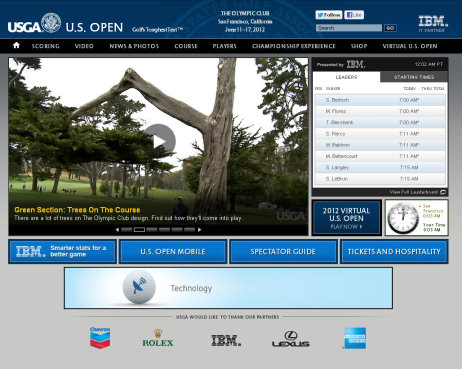 When the marquee group of Phil Mickelson, Bubba Watson and Tiger Woods tees off at 7:33 a.m. (PDT) for the first round of the 2012 U.S. Open Championship at The Olympic Club later today, the USGA’s digital platforms will be the exclusive outlet for watching the start of all the action.

Visitors to usopen.com and users of the U.S. Open mobile application, “U.S. Open Golf Championship,” will have exclusive access to the first 90 minutes of continuous play on Thursday morning through live-streaming high-definition (HD) video, followed by ESPN’s live coverage at 9 a.m. (PDT).

A complete U.S. Open television schedule for ESPN and NBC is available at http://www.usopen.com/en_US/champ_experience/viewing_schedule.html

Coverage of the marquee group will continue throughout the morning, and the afternoon group will feature Luke Donald, Rory McIlroy and Lee Westwood. Exclusive coverage will also be available on Friday, with select holes featured on Saturday and Sunday.

“This is the one of most exciting times of the year for golf fans and we’ve created a marquee destination for them to follow a marquee pairing at the U.S. Open,” said USGA Executive Director Mike Davis. “We’re thrilled to be using our digital platforms in this way so fans have a virtual front row seat to watch three of the world’s most accomplished players compete in our national championship.”

With the help of IBM, the official IT partner of the USGA, this exclusive, live broadcast window will be available to computer, tablet and smartphone users, and is part of the exciting features of the newly enhanced usopen.com platform and “U.S. Open Golf Championship” mobile application. The application is available for Android and iPhone operating systems.

In addition to the streaming video, digital platform users will have access to real-time scoring, an interactive PlayTracker, Picstream photos and the Virtual U.S. Open game.

While watching this marquee group coverage, fans will have the opportunity to interact with each other, players and broadcasters on Twitter through @usopengolf and by using the #usopengolf hashtag. Facebook users will have the opportunity to share their U.S. Open memories, as well as their thoughts and experiences from this year’s championship at Facebook.com/usopen.