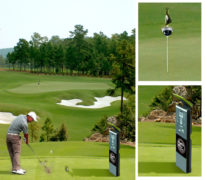 TV’s “The Gadget Show” will feature a variety of golfing gadgets in a show screened at 8pm on Channel 5, this Monday 11th October 2010.

One of the items featured – the Black Hole Golf pin camera – introduces brand-new golfing technology, and plays a central role in a fun challenge which sees the show’s presenters attempting to score a hole in one.

PR company Hiseman Limited arranged for the British invention to appear, in a deal with the show’s producers North One TV.

The world-first Black Hole Golf device is a pincam system, which uses a camera on the flagstick itself to measure a ball’s final resting distance to the hole on a Par Three. The camera broadcasts a live image to a screen on the tee, and also generates a live leaderboard display.

Golfers can thus get a great view from the green of their ball approaching the pin in real-time, generating great excitement, and can also see how their Nearest The Pin distance compares to others playing in the event.

Black Hole Golf will be available in the UK this autumn, with a worldwide launch in 2011.

The Gadget Show regularly pulls in between 1 and 2 million viewers, with significant follow-up interest generated by the show’s website.