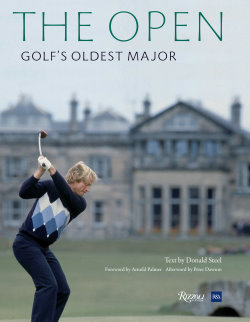 The OPEN: Golf’s Oldest Major is written by Donald Steel with Foreword by Arnold Palmer and Afterword by Peter Dawson. Published by Rizzoli International Publications Inc on 5th July to coincide with the 150th Open Championship, this photographic celebration of golf’s oldest major combines classic images with new photographs by David Cannon.

Rizzoli has joined The R&A and Getty Images to produce a breathtaking celebration of a century and a half of the sport’s most coveted competition.

THE OPEN: Golf’s Oldest Major revisits the history of the fourteen legendary links courses along the spectacular British coastline on which The Open has been played. A chapter is dedicated to each course, highlighting the famous moments of victory, defeat, partnership, competition, and tradition that have come to define them.

Distinguished golf writer, course architect and historian, Donald Steel supplies the history behind these images. Beautifully illustrated and authoritatively written, this book captures the spirit, excitement, and glory of The Open.

As a golf course architect, Donald Steel has worked on all of the courses of The Open Championship. Arnold Palmer is one of the greatest players in the history of golf.  In 1998 he was awarded the PGA Tour Lifetime Achievement Award after a career in which he won seven major championships, including two wins at The Open in 1961 and 1962.  Peter Dawson is the Chief Executive of The R&A.