TaylorMade Reveal ‘Golf Outside The Ropes’

The pursuit of Major success is something that every golfer strives for but in a game that hinges on the finest margins, what does it take to win golf’s ultimate prize?

Over the past three months, TaylorMade has gone behind the scenes with some of the game’s leading talents to examine just what the world of today’s modern golfer looks like. Following Darren Clarke’s Major triumph last year, Outside The Ropes is a film which gets up close and personal with the defending Open champion and includes a star-studded cast of Sergio Garcia, Justin Rose, Dustin Johnson and Camilo Villegas. 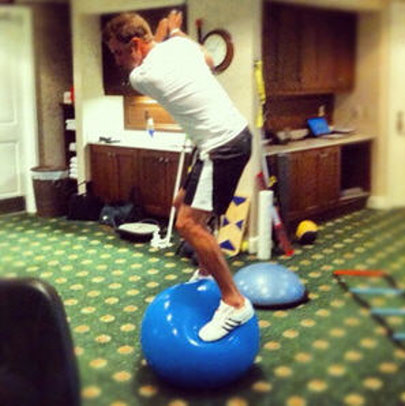 Commissioned by TaylorMade-adidas Golf and produced by Sunset & Vine, the film provides an holistic insight into a golfer’s life away from the course for the very first time. From diet to meticulous physical, psychological and technological preparation, the reality for top players in the modern era is that the game is much more than simply four tournament days; it’s sweat, toil and sacrifice seven days a week. Today, professional golfers are fitter, younger and more mentally prepared than ever.

Filmed using unrivalled access to each player, Outside the Ropes is an intimate story which begins at home with Sergio Garcia in Castellon, Spain. It offers a snapshot into a close family network and his passion for sports other than golf – which include his presidency and captaincy of Spanish lower league football team CF Borriol – and the way in which these releases from the game ensure peak performance come tournament time.

The unique story also documents life outside the ropes for big hitter Dustin Johnson and world top ten ranked Justin Rose, exploring the connection between routine off the course and achievement on it. Dustin and Justin offer a rare glimpse into fitness regimes previously just associated with elite athletes but now becoming commonplace amongst the game’s elite.

Finally, the film focuses on the increasing role of technology in ensuring peak player performance, noting the recent changes across the industry and the leading innovation from TaylorMade in product design which has seen the brand become the Number One equipment manufacturer in golf.

Outside The Ropes confronts the traditional sterotypes of the game as Justin Rose explains: “A golfer’s life outside the ropes is all about discipline, dedication, drive and hunger. Gone are the days when you just turned up and played. Golf as a sport has changed; we are now athletes and the minor details in preparation can be the difference between Major success and failure.”

Nick Robbie, Head of Consumer Marketing TaylorMade-adidas Golf EMEA, says: “This is a ground breaking project for TaylorMade-adidas Golf and we are very excited to introduce the film to golfers across all of our key markets. Outside The Ropes reveals the changing face of golf in a truly unique way and showcases the dedication of our Staff Players and the pivotal role that we, as leaders in innovation, can play in helping them achieve their goals.”

TaylorMade Outside The Ropes will be broadcast on Sky Sports as follows:

Outside The Ropes is also being syndicated worldwide in 10 different countries, more details to follow.

Use the following new link for a taster of the TaylorMade Opener video: http://tinyb.it/1931AA4E21867