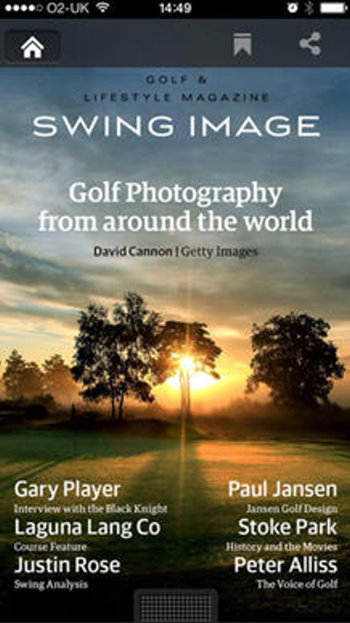 International golf and lifestyle magazine, Swing Image, has a new image for the New Year and is now a fully-digital publication available as an App that delivers an abundance of content in an innovative and exciting way.

To mark the first totally online edition, the Swing Image App is being offered to golf fans absolutely free of charge by simply downloading it direct to tablet devices such as an iPad, Samsung Galaxy, Nexus etc or to a mobile smart phone. This is easily done by going to The App Store or Google Play and searching for ‘Swing Image’. Alternatively from iPhones and iPads, click on https://itunes.apple.com/us/app/swing-image/id743669884?ls=1&mt=8 whilst Android and Smart phones can go to https://play.google.com/store/apps/details?id=com.swingimage.swingimagemagazine

Over the last seven years, Swing Image has established itself around the world as an exclusive, high-end magazine featuring every aspect of golf as well as the lifestyle that is regularly associated with the game. Alongside top professional player interviews, swing analysis and the latest equipment and fashion, Swing Image has run articles on yachts, opulent hotels as well as luxury brands such as Omega and Johnnie Walker.

The innovative Swing Image App, to be priced at £2.99 per issue following the free launch issue, will continue to offer its readers all this and more. In addition to being a captivating read, fans of the game will be able to interact within each article thanks to elements such as audio interviews, video tutorials, swing sequences using a scrub/scroll feature and image gallery slideshows that have been designed in such a way that they give the App an edge over the competition.

Unconstrained by the double-page spread format, the creators of the Swing Image App have been able to make it more interactive, image rich and visually exciting.

The launch issue includes range of fascinating features including an interview with living legend Gary Player who now 78 recently celebrated 60 years as a professional golfer, a rare insight into the life of one of golf’s most celebrated photographers David Cannon of Getty Images, and an interview with Peter Alliss, one of England’s most successful golfers who is recognized the world over as the BBC’s ‘Voice of Golf’.

There is also a segment that analyzes the swing of the current world number five, Justin Rose, who last year secured his first major victory at the US Open Championship in June at Merion Golf Club, Pennsylvania.

Swing Image also speaks with up-and-coming talent, Tommy Fleetwood, in ‘Gleneagles Tamed’ following his break-through victory in the 2013 Johnnie Walker Championship at the course that this year hosts The Ryder Cup.

Golf course designer Paul Jansen, who regularly works alongside Faldo, has been interviewed for the inaugural App. Having designed numerous courses in Europe and Asia, Jansen has now relocated to Canada where he has established Jansen Golf Design.

Also featured is the magnificent Stoke Park Golf Club that is located just outside London. Swing Image reveals the rich history behind StokePark which became internationally famous the moment James Bond defeated Auric Goldfinger on the 18th green in Goldfinger.

In addition George Porter’s teaching method, The Plane Truth, is explained using the scrub/scroll technique and Dr Haruhisa Handa talks about ISPS (International Sports Promotion Society) and its role in golf for the blind and disabled golf in the Paralympics.

A focus on World Trick Show Champion, Geoff Swain, ensures the Swing Image App enjoys a lighter note as it includes video footage of Geoff teaching the enigmatic Ian Poulter how to do some of his amazing trick shots with hilarious results!