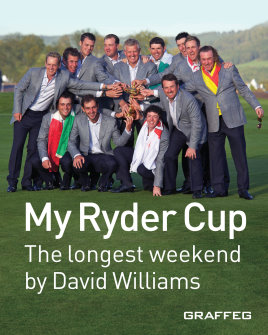 The Ryder Cup 2010, the first ever to be played in Wales, saw an unprecedented four days of electrifying golf played at the purpose-built Celtic Manor Twenty Ten course in the verdant Usk valley, and culminated in a win for Europe, after one of the most dramatic finishes in the tournament’s 83 year history.

This was the moment when, in the words of Colin Montgomerie, “the world was watching Wales, and Wales delivered.”

Published by Graffeg, ‘My Ryder Cup – The Longest Weekend’ is a glorious commemorative photographic essay of one of the world’s top sporting events, by Welsh writer and photographer David Williams. Covering practice days, four days of play, the Cup presentation and the glittering opening and closing ceremonies with brilliant photography, the book gets closer than ever to the action of this momentous, world class, four day event.

As the introduction to the book states: “Professional golf is generally an individual sport, played against the challenges of the world’s greatest courses. But one event – The Ryder Cup – gives players the opportunity to play as members of team, for the camaraderie and for the glory of holding golf’s most famous trophy aloft, and knowing that they are, collectively, the best of the best. The Ryder Cup 2010, held in Wales, brought the sternest test and the sweetest victory to the European team, under the captaincy of Colin Montgomerie.”

Well known author Williams, captures the emotions, high drama and stunning landscapes of Ryder Cup 2010, in a lively and revealing photographic style, complemented by a detailed and engagingly written overview of events, including match statistics from every round played.

Graffeg Managing Director Peter Gill said: “The Ryder Cup 2010 was a hugely significant moment in golfing history. This book is the ideal memento of the event for any golf fan, perfectly encapsulating the drama and class of the event, covering everything from the two European and American teams, to the four days of play, and ultimately how the Cup was won.”

David Williams is a writer and photographer working in Wales and specialising in heritage, culture and sports. He is the author of several books and many articles about Wales, a frequent contributor to television and radio. He previously wrote, and photographed Graffeg books: Landscape Wales, About Cardiff, About Wales and Village Wales. He is a contributor to PhotolibraryWales and Getty Images.