The ad is based around SkyTrak’s impactful slogan: ‘more than a launch monitor, more than a golf simulator, it’s the best of both’. 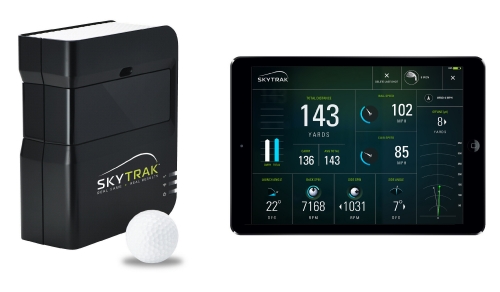 The TV commercials, which run until the end of November, close with details of SkyTrak’s autumn 2017 promotion and an Offer Code saving £200 on a SkyTrak purchase. SkyTrak Showcase Dealers can offer this same discount with their own unique Offer Code, supplied by SkyCaddie HQ.

A digital advertising campaign is then set to run through December to drive pre-Christmas sales, again centring on the money-off promotion. The Offer Codes are valid until 31 December 2017.

SkyTrak Showcase Dealers earn a 20% affiliate fee from SkyTrak sales which they generate. They are listed in a postcoded Dealer Search on the SkyTrak website, and there is no need to hold stock, as SkyTrak ships directly to the purchaser. Showcase Dealers also receive 20% off their initial SkyTrak purchase, when they register their first subsequent sale to a consumer.

A debut SkyTrak TV campaign on Sky Sports earlier this year generated a surge in sales and enquiries across the nation’s pro shops. Both campaigns were planned and booked by SkyTrak’s European agency, Magic Hour Media.

“SkyTrak is quite simply flying, and has been since it launched in late 2015, so if you are a golf retailer be sure to get on board to benefit from the pre-Christmas TV exposure for SkyTrak this year” said James Holmes, SkyCaddie’s UK & European Sales Manager.

“SkyTrak has created a new type of customer” he said. “Golfers can now afford their own launch monitor and, if also they want to use it as a home entertainment system, SkyTrak also enables them to access the world’s best golf course simulation software – and over 100,000 high-definition golf courses – at home on their own TV sets or tablets.

“With the SkyTrak itself available for under £2,000 on 0% pay-monthly finance, and with simple subscription plans for the simulator software, small wonder that SkyTrak is one of the hottest golf products out there right now. This autumn’s £200-off promotion simply makes it an even more compelling retail prospect.”

Almost 500 golf pros nationwide have invested in SkyTrak since it arrived in the UK just two years ago, and are overwhelmingly positive about the device’s accuracy – making it ideal for custom-fitting and coaching.

It has also started a home golfing revolution, with more and more consumers now filling unused space in their homes with a SkyTrak setup, enabling them to play golf all year round. All they need is a mat and a net, as their SkyTrak displays on most family TV sets, working through an iPad or a PC.

SkyTrak means that golf club operators can embrace the setting sun and long autumn evenings – and encourage golfers in the area to visit the club after dark, and during bad weather.