Scots continue to dominate as Order of Merit Tops 27,000 Entries 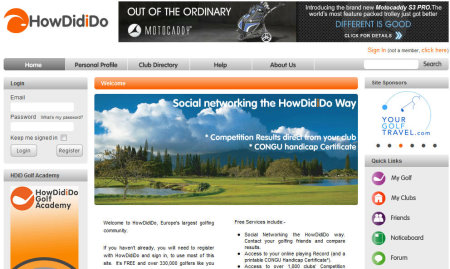 Scottish golfers continue to set the standard in the 2012 Titleist Order of Merit (OOM) powered by HowDidiDo and Golf Monthly – with five of the six category winners for July coming from north of the border.

The Scots provided five of the six winners in April and June, and they have continued to lead the way as the OOM nears its close.

Nearly 27,000 golfers entered the OOM, which teed off on 31st March. That’s an increase of more than 230 per cent on last year’s inaugural competition, and, each month, the lucky category winners receive a fabulous GolfBuddy Voice audio GPS distance measuring device as a reward for their impressive showing.

The overall prize for July went to Matthew Smith, from Newmacher GC, in Aberdeenshire, while the only non-Scot was men’s division three winner Neil Thacker, of Druids Heath GC, in theWest Midlands.

The OOM is a virtual golf competition open to every golfer whose handicap is listed on Howdidido.com and who participates in medal competitions. Neither the player nor the club has to perform any additional entry of scores as all medal scores are automatically collated by HowDidiDo’s cutting-edge handicapping software. And, each week, the OOM leaderboard is updated with the latest scores.

Placings in the OOM are determined by each player’s five best medal rounds at their own club between 31 March and 30 September, with the scores worked out on best net differential to ensure a level playing field regardless of the difficulty of the individual courses.

HowDidiDo’s managing director, Barry Dyett, said: “We were initially surprised to see so many winners coming fromScotland, but it’s fair to say we’re now astonished that they are able to maintain such an outstanding level of performance. It really is the Home of Golf.

“To have nearly 27,000 golfers competing in our competition sets this order of merit apart from every other competition. To emerge victorious from a field of this size is an enormous achievement, whether just as a monthly winner or as the ultimate victor.

“This number of participants makes the order of merit one of the most subscribed sporting competitions in theUK, behind events like the London Marathon and Great North Run.”

The OOM has eight sections within which prizes can be won, including men’s, ladies and junior categories. Winners will each receive a Titleist bag, Titleist glove, cap and a dozen Titleist Pro V1 or Titleist Pro V1x golf balls. The overall winner will win a full long game fitting – for driver, fairway wood and hybrid – at a state-of-the-art Titleist fitting centre.

HowDidiDo boasts a membership of more than 330,000 golfers, and contains a database of handicaps, results and scores for in excess of 1,300,000 men and women. Standard membership is free and the plethora of statistics available allows any golfer to analyse and compare performance with other players at their own club or across the network. During 2011, the site received more than 60 million page views.

Registration to HowDidiDo is required to check handicap lists or competition results, but it remains a free service to any golf club whose administrators use CLUB2000 software from Club Systems International, which is in place at around 2,000UKclubs. Nearly 1,500 golf clubs currently use the HowDidiDo site and the service welcomes new members daily.