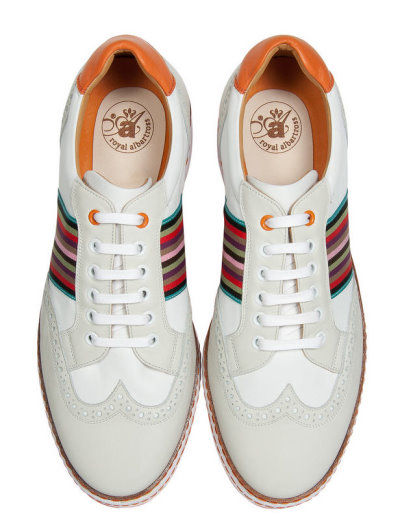 Royal Albartross has scooped two influential awards in the USA, after leading golf website mygolfspy.com awarded the brand the accolades of ‘best overall’ shoe in both the spikeless and traditional categories for 2014.

The popular website, with more than 350,000 unique visitors every month, is highly respected for its honest, independent product reviews and, this month, tested and rated 29 new shoe models for “comfort, performance, durability, and style”, many from world-renowned, cash-rich, multi-national brands such as Nike, adidas, ECCO and Footjoy.

But it was the shoes produced by a small, focussed family firm based in south-west London – with advocates such as model Jodie Kidd, actor Dougray Scott, Aussie cricket legend Shane Warne and TV sports presenter Dan Walker – which swept the board. Royal Albatross claims it is the maker of the “world’s most luxurious golf shoes” – and it’s now a boast which can be quantified.

Mygolfspy.com stated: “We reviewed shoes that span the spectrum from budget to luxury … During the testing, there were certainly plenty of surprises and a handful of shoes scored higher and some scored lower than you would probably expect. All of the shoes have been judged on the same scale in addition to the individual scales …”

Awarding the best ‘overall’ title in the spikeless category, it added: “The initial soft-spike option from Royal Albartross is a masterpiece. You won’t understand the difference between these shoes and the others until you see them in person. While the price is higher than most, this is still a value for the level of detail and satisfaction that you’ll get out of this excellent line of golf shoes.

“The Club Collection also debuts in six different color combinations – at least one of which (will) appeal to almost everyone. The Royal Albartross Club Collection is a fashion-forward quality investment that will stand the test of time.”

And, in the ‘traditional / spiked’ category, of Royal Albartross’ Grayson, it said: “If you’re ready to treat yourself then this is the shoe to do it with. Classic styling and meticulous craftsmanship combine to create the ultimate traditional golf shoe.

“Everything from the hardware used in the eyelets to the stacked leather soles scream quality. Handcrafted in Italy says it all. The Royal Albartross Grayson will instantly make you feel like Bobby Jones.”

A delighted Alex Bartholomew, the designer and founder of the brand, said: “As you can imagine, we’re overjoyed to come out on top in both categories against such well-known names.

“We’d like to thank the team at mygolfspy.com for the time they took over their tests and reviews, because it must be very easy, in their position, to think ‘a golf shoe’s a golf shoe’. We’ve always believed that our extra care and attention to detail made us stand out from the crowd on close examination and these two accolades merely confirm that conviction.

“What we do combines real excellence of engineering with traditional shoe craftsmanship, so it appeals to lovers of quality. Royal Albartross shoes are a marriage of classic and contemporary European design and leathers with Italian craftsmanship and American cleat technology.”

The new contemporary men’s spikeless shoes (ladies’ versions will be available later in the year) are available to order online now at the website and from TrendyGolf.com for delivery later this month <May>. The traditional, brogue-style shoes are available for immediate delivery through the website or through pro shops at StokePark, Brocket Hall and Wentworth, and also through specialist on-line fashion retailer TrendyGolf.

The new lines will also be available through many outlets in the USA, Mexico, Australia and South Africa, where Royal Albartross is proving increasingly popular, particularly with celebrities.