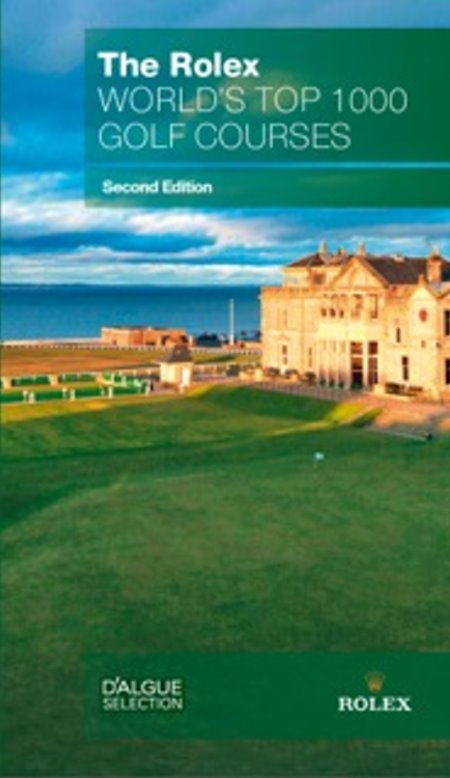 The second edition of The Rolex World’s Top 1000 Golf Courses contains 107 new entrants. It is the result of a 2-year updating work with the collaboration of 200 panellists worldwide.

2010 saw the first edition of the Rolex World’s Top 1000 Golf Courses. Building on the success and appreciation of that publication, the team at D’Algue Selection, under the leadership of its founder Gaëtan Mourgue d’Algue, has collaborated to produce this second edition, which once again reviews the golf courses of the world and establishes the very best 1000.

Gaëtan Mourgue d’Algue was one of France’s finest golfers of his generation, a founder of the Golf Européen magazine and the Trophée Lancôme, and was also one of the main instigators of the European Tour. In this publication he has been ably supported by his daughter Kristel, 1995 NCAA national champion and former European Women’s Tour member, and Bruce Critchley, Walker Cup player and respected commentator with Sky Sports UK; together they persuaded Rolex to come on board for this far-reaching venture.

As a major sponsor of golf globally and with deep respect for the game’s values and traditions, Rolex is a natural partner of D’Algue Selection which has once again produced a genuine and totally independent ranking for the world’s top golf courses.

The principles are the same as for the first edition. There are some 32,000 courses located around the world and a team of 200 independent, yet fully qualified, inspectors located throughout the world have reviewed the courses within their area. They were obviously interested in those that have emerged since 2010, while never ignoring and in fact reassessing those that were in the first edition. Indeed some that were looked at first time round and were not chosen were again checked out, with some making it this time; not that there has been any lowering of standards, just that occasionally recent improvements now merit inclusion.

The pace of new construction has ebbed considerably since the “gold rush” days of the late 20th century, though many in the throes of creation when the first edition went to print have been completed, several to warm applause. In particular, new courses added to the exceptional ones identified in both Tasmania and Bandon Dunes in Oregon, will be found in the Guide this time, all of them adding to the high reputation of those already there.

The other notable addition to the world atlas of golf is Hainan Island, a 300-mile long piece of land in the South China Sea which, after decades as a penal colony, has recently seen comprehensive redevelopment as a centre for tourism. The golfing star is to be found in the north where the Chu family, renowned for the dozen courses at Mission Hills on the mainland, has constructed another ten close to the capital Haikou, with several stretching out over old lava fields.

Continental Europe has seen consolidation of existing stock, sensitive renovation of old masters being of greater concern than building ever more courses at a time when local demand seems well satisfied. The renovations have been as carefully monitored as any new creations and in most cases well qualified designers have been part of the remodelling process. On the fringes of Europe there have been new courses of quality in such places as Bulgaria and Cyprus and indeed Greece, the best of which find themselves in the Guide this time round. It is to be hoped the economic gloom surrounding Europe’s core doesn’t make their arrival short lived.

The balance of the guide remains largely unchanged with a little over a third to be found in the United States and the great old courses of Great Britainand its Commonwealth, together with their counterparts on mainland Europe forming the next largest group.

Japan is still important in Asia-Pacific, but the greatest momentum is now driven by the new enthusiasm to be found in China, while outlying parts of the world continue to have a significant presence. At the peak there are still just 15 courses – though by no means all the same as before – deemed worthy of a score of 100 out of 100, history, provenance and position in the game still recognised as important elements of  “the best there is…”

In all there has been a turnover of just more than 10%, with 107 new entries, of which 35 are to be found in the United States. Had this exercise been undertaken, say, 25 years ago then there would surely have been greater change, but with the world now taking a pause after the most significant period of course construction in its history, the pressure from fine new developments for inclusion is somewhat reduced.

“There is no more comprehensive guide to the world’s best places to play. Don’t plan your next golf trip without giving this book a look.” George Peper, Links Magazine.