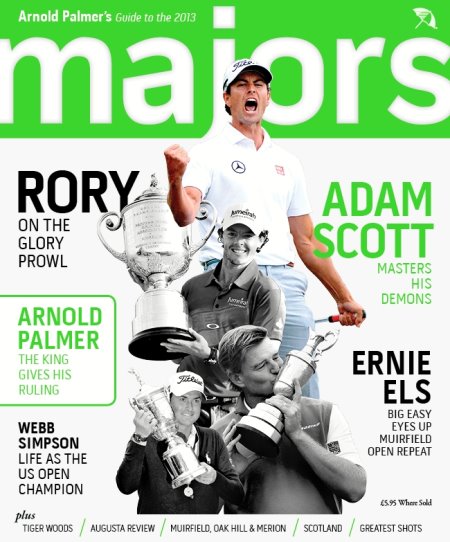 Arnold Palmer, perhaps the most charismatic golfer ever to swing a club, defined the modern Majors of professional golf more than half a century ago. Since then every tour pro has regarded victory in the Masters, US Open, Open or USPGA Championship as a career-defining moment.

Superbly produced across 172 pages, the second edition of Arnold Palmer’s Guide to the Majors is now available for £5.95 at W.H. Smith and Martin McColl stores across the UK.

This indispensable guide contains interviews with all the reigning champions (Rory McIlroy, Ernie Els, Adam Scott and Webb Simpson), previews of this season’s Majors, course reviews, historical articles (including profiles of Harry Vardon and Donald Ross), biographies of Tiger Woods and the game’s other leading players, and the winners of every Major ever played.

Articles have been contributed by many of golf’s leading journalists from both sides of the Atlantic, including the BBC’s Iain Carter and national newspaper correspondents Bill Elliott, Andy Farrell and Lewine Mair.

In addition to the printed magazine, the guide also exists as an iPad app https://itunes.apple.com/us/app/majors-magazine/id655598838 and as an online magazine http://themajorsofgolf.com