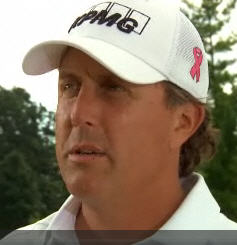 KPMG LLP, the U.S. audit, tax and advisory firm, has launched a new website featuring Phil Mickelson discussing key moments of his playing career and how critical attributes of leadership have enabled him to achieve professional success.

KPMG is linking with Mickelson, recently named “2010 No. 1 Golfer of the Year” by Golf Magazine, in a unique new campaign that demonstrates how principles of strong leadership can help business leaders cut through the complexity of today’s marketplace and achieve their goals.

Through revealing vignettes about his greatest golf moments, Mickelson for the first time shares how leadership attributes like vision, adaptability, passion and persistence have helped him on the professional tour – and why these critical attributes are needed to be a good leader.

“I happen to know a little bit about persistence,” Mickelson confides in one video segment on the website, referring to the 12 years he competed on the PGA Tour before winning his first major championship – the 2004 Masters Tournament.

In another segment, Mickelson credits focus in telling a behind-the-scenes story about what he calls “the shot of my life” – his decisive “pine straw” shot between the trees on the 13th hole of the 2010 Masters Tournament.  “It was a bit of a risky shot.  When you have the right focus, you have the confidence in the decisions you make.”

Mickelson also provides new perspective on his comeback victory in the 2009 Tour Championship following a rough start, and the vision he had to achieve his miracle shot on the 18th hole to win the 2008 Crowne Plaza Invitational at Colonial.

“Phil’s decision-making on and off the course and his inspiring performance in the heat of competition mark him as a true leader and that is why we are proud of our continuing association with him,” said John Veihmeyer, Chairman and CEO of KPMG LLP.  “KPMG believes true leadership is the critical difference in achieving success in any competition, whether on the golf course or in the business arena.”

KPMG leaders are also featured on the new website (http://www.phil.kpmg.com/) discussing how these leadership principles can help companies achieve success. The website is part of KPMG’s “Mark of a Leader” advertising campaign, which begins this month during the PGA Tour Playoffs.