Miracle at Medinah watched by Millions

More than 4 million viewers in the UK watched the live coverage of The Ryder Cup on Sky TV and 2.3 million watched BBC 2’s highlights programme on Monday 1st October.

This does not include viewers in clubs and sports bars. In addition, millions more followed the excitement (possibly from behind their sofas) on the excellent BBC Radio 5 Live, the BBC website and many other platforms.

Jon Stainer, Senior Vice-President in the UK for Repucom, a world leader in full-service brand analysis and research, said, “Golf isolates a hard-to-reach demographic which makes the top events a very attractive platform for sponsors. Where the Ryder Cup differs from the other major events is that, in terms of its audience, it transcends the sport of golf due to the strong element of national or regional pride. It‘s an incredibly engaging storyline and you don‘t have to be an avid golf fan to be hooked by the drama and emotion. As our research highlights, it‘s also no longer a regional affair as sports enthusiasts all over the world are clearly being drawn to it.”

TV audiences in Ireland and Spain are also thought to have been particularly strong while the estimated live viewing figures for the US were more than 8 million over the three days.

Repucom has supplied GBN.com with some exclusive social media and market research insight on the Ryder Cup: 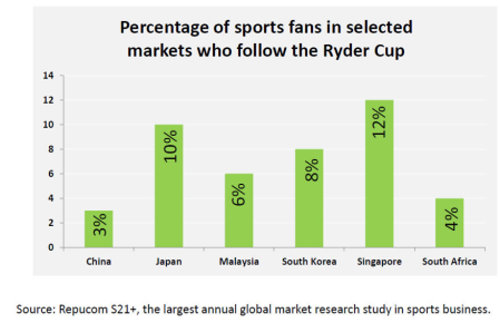 Viewing figures for the BBC Ryder Cup Highlights programmes on Friday 28th and Saturday 29th September peaked at 400,000 but by Sunday the number of viewers reached well over 1,000,000. On Monday 1st October despite (or perhaps because) the result being known the peak number of viewers was 2.3 million.