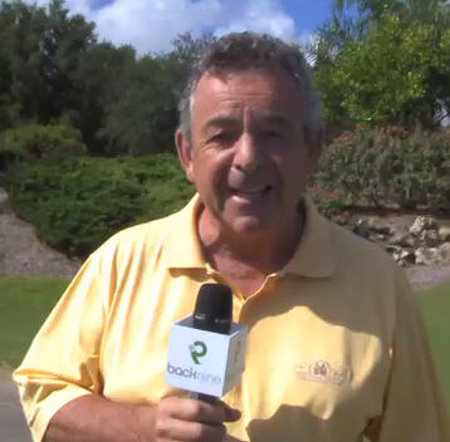 Back9Network, the new sports lifestyle network for golf fans who want to do more than follow the leaderboard, today announced that Tony Jacklin, widely viewed as the man who helped revitalize British golf and re-establish European competitiveness in the Ryder Cup, has joined the network as Global Brand Ambassador.

In his new role, Jacklin will be provided with a multimedia platform — TV, web and mobile — to expand upon his lifelong passion and commitment to make a positive difference in the world of golf. From his years playing on the professional tour, to his experience designing world-class golf courses all over the world, Jacklin will work with Back9Network to honour golf’s history and traditions, while growing the sport’s appeal for a new generation. He will make appearances on behalf of Back9Network and be a frequent contributor online and on-air.

In his first online video feature, Jacklin shares personal, inside stories of the 1969 Ryder Cup and “The Concession.” In addition, he will appear with Matt Adams, host of the popular SiriusXM PGA Tour Radio program, “Fairways of Life with Matt Adams,” and Back9Network contributor, to provide Ryder Cup match recaps and commentary at www.Back9Network.com.

“When I heard the passion the team at Back9Network has for shining a new light on the game, I asked where I could sign up,” said Jacklin. “While some involved in the industry are slow to accept change, the fact is that the game has already changed around them. Golf needs to find new avenues to open up the sport and better reflect the diverse image of today’s golf fan. Back9Network’s view of the game beyond just focusing on the pro tournaments is a smart approach.”

Jacklin’s remarkable exploits and iconic brilliance revitalised British and European golf in the 1960s and 1970s. For four seasons – from 1969 to 1972 – there was no brighter star in the game. At the age of 25, he broke every performance record in the history of British golf, becoming the first Briton to win on the PGA Tour in 1968 at the Jacksonville Open, winning the Open Championship at Royal Lytham in 1969 and the US Open in 1970.

“Tony Jacklin is a major addition to the Back9Network crew as we build a team of current and former tour professionals and others who live and love golf and share our desire to grow the sport,” said James Bosworth, founder and CEO, Back9Network. “We look at golf through a broader, more diverse and more accurate lens. Tony has never been shy to voice his opinions, which means he fits in perfectly at Back9Network.”

Jacklin was involved with Jack Nicklaus in one of the most memorable moments in Ryder Cup history at Royal Birkdale in 1969. After his eagle putt on the 17th hole evened the match, Nicklaus conceded Jacklin’s two-foot putt on the 18th, halving the match, and ending the Ryder Cup with a tied score. “The Concession,” as it came to be known, ended with the two golfers walking off the course arm-in-arm in one of the world’s great displays of sportsmanship.

Jacklin and Nicklaus later co-designed a golf course in Bradenton, Florida called “The Concession” to commemorate the moment.

He is one of the very few players to be invited to become an honorary member of the R&A. Jacklin was also inducted in the World Golf Hall of Fame in 2002 and was awarded a CBE (Commander of the Order of the British Empire) for his services to golf.

Back9Network, which made its online debut in 2012, is focused on all the things golf fans love about playing and living the game. Back9Network recently broke ground on its state-of-the-art TV studio and video production facility in down town Hartford, Connecticut, which is quickly becoming the sports media capital of the world with ESPN, NBC Sports and YES Network also based in the state. Back9Network plans to launch its TV programming lineup via cable and satellite in the first half of 2013.

Next month's Aberdeen Standard Investments Scottish Open will be played in front of a limited number of spectators as the European Tour trials the return of fans to its events.

The Apes Hill Club in Barbados is relaunching under new ownership with a mission to be “the most spectacular and memorable golfing experience in the Caribbean”.