Kikkor Founder goes in search of another Big Break 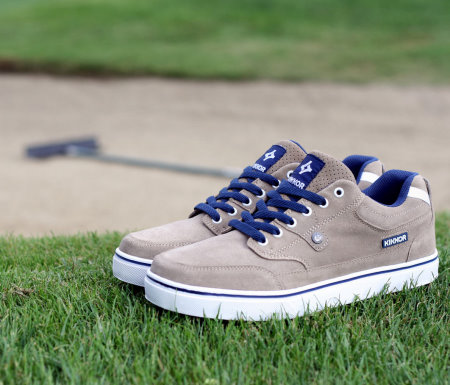 The creator of the popular North American street-style golf shoe brand Kikkor, James Lepp, will once again be a central figure in the new series of the Golf Channel’s popular Big Break series.

Lepp, who was runner-up in last year’s Big Break Greenbrier, will join forces with Super Bowl-winning quarterback Mark Rypien, 50, a one handicapper who found fame as the first Canadian-born quarterback to start in the NFL – with the Washington Redskins – and the only Canadian to win the Super Bowl’s most valuable player (MVP) award.

The two Canadians will be joined in the new format by 20-year-old Meghan Hardin, who was eliminated in the first episode of last year’s Big Break Atlantis, when Big Break NFL airs in the US on October 8. The show will include six three-person teams that feature former NFL players Jerry Rice, Tim Brown, Marc Bulger, Al Del Greco and Chris Doleman, showing off their golf skills at the Dorado Beach Resort, Puerto Rico.

Last year’s appearance on Big Break Greenbrier got him enthused about playing competitively again and put a spotlight on his footwear brand, Kikkor Golf, he admitted.

“It definitely helped the first time around with Big Break Greenbrier. There’s a lot of interest in the show, period,” said Lepp. “It’s a heavily-watched show on the Golf Channel, so you’re undoubtedly going to get a lot of interest, not only in the people, but also what they’re wearing and Kikkor is such a big part of me and who I am that they kind of go hand-in-hand.”

That knock-on benefit was seen as far away as Europe where Kikkor is distributed by Surrey-based Barrelfield Golf Europe.

The company’s sales director Ross Hastings explained: “A lot of European golf fans clearly watch the Golf Channel’s programmes on line because there was increased interest in Kikkor while James was in the show.

“He didn’t tell us how he got on last year and won’t say a word this time around either, but naturally we hope he goes all the way to help take the fashionable brand to an even wider audience,” smiled Hastings.

The European spring/summer 13 range of the popular shoes launched no fewer than five new product lines, including the unique Men’s Slyder Premium (£79), a deck-shoe style but with a leather upper and embedded spikes; the brogue-look Men’s Player (£89), with a full-grain, waterproof leather upper and embedded spikes; and the suede-style Men’s Tips (£99), which comes with a two-year waterproof warranty.

And the ladies didn’t miss out either as the trainer-style Women’s Tour Estrella (£89), with Kikkor’s own VEKTRboard™ traction system, is sure to prove popular in its four colour ways.

Retailing at under £100, not only are they the most fashionable shoe on the market, they’re also not going to break the bank. From the unique deck-shoe-style Slyder Premium through to the Women’s Tour Estrella, the shoes are unmistakably trendy and desirable, as well as practical and effective.