‘Jewel In The Glen’ 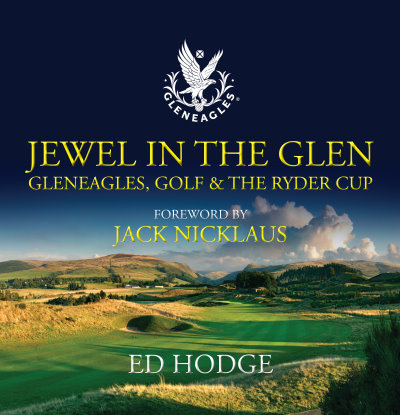 As it anticipates its 90th birthday by staging the 40th Ryder Cup Gleneagles, the spiritual home of golf, is profiled in a new book, Jewel in the Glen: Gleneagles, Golf and The Ryder Cup’ by Ed Hodge.

To celebrate one of the most exciting periods of its existence Ed – a former Gleneagles caddy and Golf Office employee – has interviewed an array of national and international celebrities, from Gary Player, Lee Trevino, Tom Watson, Paul McGinley, Sam Torrance, Sandy Lyle, Bernard Gallacher and Peter Alliss to Andy Murray, Kenny Dalglish, Stephen Hendry, Gavin Hastings and Sir Jackie Stewart, to reveal what Gleneagles and the Ryder Cup means to them while examining the impact that the tournament will have on the local community and the wider Scottish society, culture and economy.

The book, produced in association with The Gleneagles Hotel, begins with a foreword by Jack Nicklaus, arguably the greatest golfer of all time and the designer of the PGA Centenary Course at Gleneagles, and features a hole-by-hole guide to the course by Ryder Cup legend, Colin Montgomerie.

“We all have dreams and I’m delighted to have fulfilled one of mine with this publication,” says Ed, who grew up in near-by Braco and has enjoyed a writing relationship with Gleneagles for a number of years.

“Given my passion for the area, golf, Gleneagles and the Ryder Cup, it’s been a delight to work on this project. It’s a hugely special time for Gleneaglesand I’ve enjoyed speaking to so many differing personalities to document the history of golf at the resort and share their love of Gleneagles.”

“Gleneagles is among the great places in the world to visit and play golf, and we are highly confident The PGA Centenary Course will showcase itself and Gleneagles well in The 2014 Ryder Cup matches,” says Jack Nicklaus, in the foreword. “Given my association with Scotland and Gleneagles, it was a privilege and pleasure to have the opportunity to contribute a foreword for Ed. His book offers insightful reflection and a wonderful celebration of golf at Gleneagles.”