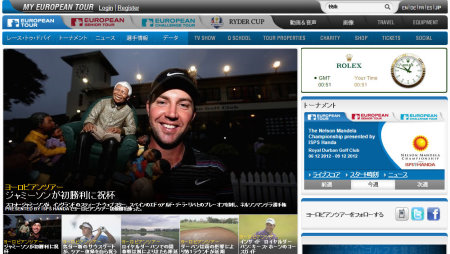 A Japanese version of www.europeantour.com is launched today as The European Tour and Golf Digest Online Inc (GDO) begin a new Japanese language partnership at the start of the 2013 Race toDubai.

jp.europeantour.com, the first non-European language of europeantour.com, is managed in partnership with GDO in the latest phase of the Tour’s multilingual strategy following the introduction of French, German and Spanish versions, and is aimed at further enhancing the user experience for the Tour’s growing global fan base by providing content in local languages.

The launch of jp.europeantour.com coincides with the opening event of The 2013 Race toDubaijust weeks after a thrilling conclusion to the 2012 season when World Number One Rory McIlroy capped a magnificent year by winning the DP World Championship,Dubaias he topped both the Race toDubaiandUSmoney list.

Mark Lichtenhein, The European Tour’s Director of Broadcasting and New Media, said: “The partnership with GDO is another important step forward in our strategy of providing a localised experience of The European Tour for our fans all over the world.

“Given the globalisation of The European Tour and popularity of golf and the Tour inJapan, this introduction of the first non-European language is an exciting new dimension to our multilingual strategy.”

Yasuko Mukai, Director / Editor in Chief, Golf Digest Online, said: “We are extremely excited with this new partnership between The European Tour and GDO.

“We believe this agreement will bring huge benefit for Japanese audience, and we will make our best effort to showcase the great tournaments and players from The European Tour.”

Golf Digest Online Inc. (www.golfdigest.co.jp) is the largest online destination for golf in Japan, providing a one-stop service with the most comprehensive and up-to-date information on golf (media business), a full line up of golf products (retail business), and the largest offering of online tee-times (golf course service business) in Japan. GDO was listed on MOTHERS of Tokyo Stock Exchange in 2004 and has over 150 million monthly page views and 2.1 million registered members as of October, 2012.

The strategy of working with federations and local partners heralded a new approach to developing multilingual opportunities and aims to replicate the model acrossEuropeand around the world. europeantour.com’s multilingual programme began with the French and German Golf Federation partners (SFR inFranceand golf.de inGermany) in 2011 and continued with the Spanish version in partnership with the Real Federacion Española de Golf (RFEG) earlier this year.

The different language options can be accessed through the icons on the top right corner of www.europeantour.com homepage.