Golfshake Gets Set to Continue Growth in 2014 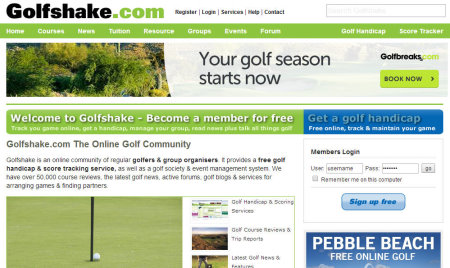 Following a record breaking year in 2013, which saw Golfshake independently rank as one of the UKs top 2 golfing portal websites, the trend looks set to continue in 2014 as the Golfshake team build up to the new golfing season.

2013 saw Golfshake site traffic continue the impressive growth over the last 3 years with traffic levels up per month 50% year on year. The peak months saw over 220k visitors accessing the site with more and more golfers using the site not just for the score tracker or golf course reviews but to interact on the site within the community, read unique golf content and access the online tips and tuition.

Golfshake visitors and members are a highly engaged active audience of club and non-club golfers who access the site direct, through regular email newsletters, social media and via a member database of over 160k golfers. Each month over 100k golfers visit the golf course section and in a recent survey the members and visitors to the site reported playing golf at least twice per month with 63% of the members playing 6 or more different courses per year.

Earlier this year Golfshake expanded the team recruiting golf industry professional Owen Davies who is responsible for all aspects of Golfshake’s content, marketing and social media.  Owen joins Golfshake having ran his own digital agency for the last 2 years and previously working for PowerPlay Golf and Golfsmith Europe.

With the golfing season just around the corner Golfshake is getting set to roll out further updates and improvements including several new initiatives and an updated, refreshed and responsive design to adapt to the growing audience of golfers accessing the site on the go through mobile and tablet devices.