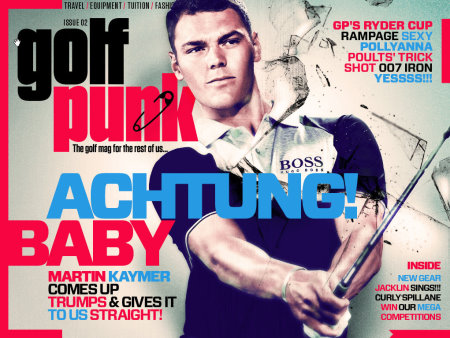 Tim Southwell, the founder of GolfPunk and co-founder of loaded magazine, has announced that the new digital-only GolfPunk had been nominated for Digital Magazine Launch of the Year and Digital Sports Magazine of the Year.

The Digital Magazine Awards are the most coveted awards in the international magazine industry, and include the prestigious Magazine of the Year award, won last year by Conde Nast’s WIRED (UK).

The judging panel for the 2012 awards will include the Managing Editor of Technology at AOL Huffington Post Media Group, The Times Digital Development Director, the Vice President of Getty Images, and Ogilvy Group’s Director of Innovation Solutions.

Southwell commented: “It’s great to be shortlisted for not one but two categories and at such an early stage in our development as we have just released our second issue. We know we are up against some tough competition from the likes of Men’s Health, Total Film and Stuff in the New Format Magazine Launch of the Year, and Sport Magazine in the Sport Magazine category.”

Southwell added: “We are quietly confident because we know that we have not only created a great magazine but a great platform that delivers a unique experience that can be enjoyed on any device with a browser. And we will have an App solution out with our third issue, which will add another dimension to what we are doing, and provide us with access to a global market.”

According to Hudson: “I believe having a Digital Magazine Award will help potential readers seek out new titles, so as online newsstands become cluttered, it’s easy to find the best in market. I also hope it will encourage advertisers to invest significantly in high quality digital magazines.”

For more information on the awards please visit www.digitalmagazineawards.com.

To view the second issue of GolfPunk go to http://golfpunk.enjoymags.com/issue02