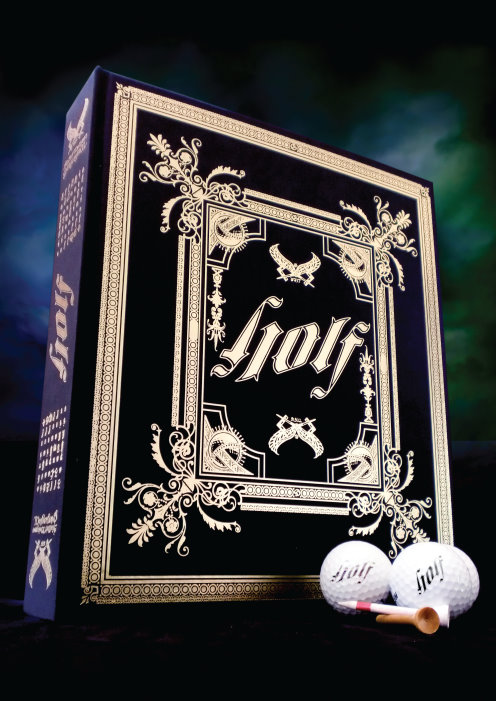 Four years ago Paul Skellett and Simon Weitzman knew nothing about golf. The only previous connection to the game was that Weitzman’s cousin, Elliott Bernerd, the celebrated property developer, used to own Wentworth Golf Club in the late nineteen eighties.

Both Skellett, an artist, designer and branding specialist, and Weitzman, a TV director and animator wanted to do something during the early part of the recession to show that British craftsmanship was still very much alive.

As artists they looked for a subject that encompassed the human spirit of adventure, the instinct to communicate and connect, the art and beauty of the landscape, as well as how these elements combined to produce something that had deep roots in our popular culture – The common denominator being the game of golf.

With the help of European Golf Design and with Colin Montgomerie acting as the publication’s resident professional, Skellett and Weitzman started a four-year odyssey to explore the art, spirit and evolution of the game, as well as looking at the land it’s played upon, how it’s played and where the business of golf is heading in the future. The result is the duo’s first publication, the aptly named GOLF.

Over the years Skelllett and Weitzman have journeyed the globe, collecting contributions and interviews from over 50 industry experts, societies and associations, including the PGA (UK/USA), PGAs of Europe and the European Tour. Further contributions have also been gained from media celebrities, including Marco Pierre White, the Michelin star chef, David L Simon, the former head of Dreamworks, Fox Network andBuena Vista, and Rock star, Alice Cooper.

There are also exclusive chapter contributions from Todd McCormack, son of IMG legend, Mark, and a chapter on the comparable evolution of cricket, which has been compiled in collaboration with the Lords and MCC archives, inLondon, as well as further comment from legendary Augusta photographer and archivist, Frank Christian. Other chapters on how the game is played have been compiled with world famous coach, David Leadbetter and top biomechanics expert, JJ Rivet.

After four years the duo have produced a truly unique and original piece of work, filled with artistic passion and energy, with a design and editorial execution unlike any other seen to date, in any other publishing genre.

Skellett and Weitzman have created a giant luxury folio installation version of the publication, limited to 10 installation pieces, covered in the world’s rarest leather, and measuring over a metre in length and weighing in with 140 pieces of editorialised artwork at 82lbs.

Then there is a hand finished collector edition, limited to 2,100 copies, explaining the evolution and spirit of the game, and told through rare and never seen before archive imagery and exclusive paintings of legendary courses, players and course designers, along with a highly entertaining 18 chapter, 105,000 word, fully illustrated editorial, covering a whopping 582 pages (not bad as the duo originally advertised the publication at 320 pages). In addition there is a 140 piece, limited edition art collection that sits alongside the two versions of the publication.

GOLF contains hundreds of original pieces of artwork, completed by the duo. This includes the restoration of hundreds of rare and previously unseen artworks, letters and historical prints, sourced from private collections on the east and west costs of the USA.

In addition there are many rare and previously unseen pieces of restored archive from key golf clubs with specific historical connection to The Open and Ryder Cups, as well as early images of Augusta, prior to The Masters. Skellett and Weitzman used many painstaking restoration techniques, often rescuing important historical images from oblivion. It’s the attention to detail at every stage, not only in the imagery, but the stories the imagery tells alongside the editorial, that really sets GOLF apart as a unique piece of work.

“GOLF as a publication, in terms of its style and execution, goes way beyond anything that’s been attempted before,” says Rick Mayston, Commercial Director, European Book Publishing / Literary Agent (Non-Fiction).

“GOLF is a book for life. You could open it every day and find something new and intriguing each time,” said Elliot Lake, Director at City Golf, London

The combination of the folios, produced with the Royal binders in London, the Collector Edition, produced in Somerset, and the accompanying art collection, produced in Doncaster, gives GOLF a truly unique status in the realms of British sports publishing, having already been pre-listed by the Saatchi Gallery online store and pre-purchased by the USGA Museum of Golf, in the USA.

Recently described as ‘the modern Bible of golf’ by contributor, David Leadbetter, GOLF is already being sought after by collectors, as well as corporate companies looking to impress their VIP clients. It is also the ideal club library and captain’s gift, as well as a unique tournament prize, and in the case of the luxury folio, trophy.

The collector edition publication is due out late October.

Wonderland Fine Art Publications is currently looking for investment to launch up to five titles and accompanying art collections, over a five-year period, and is inviting offers starting at £250,000 and rising to £1,500,000, in return for equity.

The first publication, GOLF, with its folio, collector edition and art collection has a potential retail value of over £4,000,000, and the duo are looking to grow the company aggressively with a mixture of sport and arts titles over the years ahead, using British craftsmanship and their unique techniques in painting and restoring images and artworks, all with a detailed but satirical approach to the editorial.