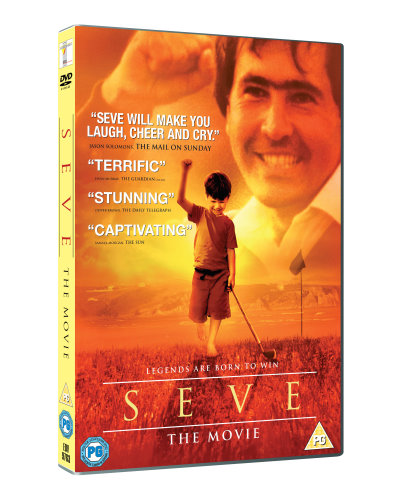 SEVE The Movie will be available to buy on DVD & Blu-ray from Monday 20th October. This Review has been submitted by Tony Menai-Davis founder of The Shire London, the only Seve Ballesteros golf course in the UK.

There is one moment of emotion so raw, in SEVE The Movie, that it may just leave a permanent scar on the hearts of all who loved Severiano Ballesteros – but the moment only adds to the power of this absorbing documentary.

In 2009, less than eighteen months before he succumbed to brain cancer, Seve was presented the BBC Sports Personality Of The Year Lifetime Achievement award by his friend, Jose-Maria Olazabal.

Undergoing treatment for a malignant brain tumour and too ill to travel to the UK, he received the award at his home in Spain via a satellite TV link. He spoke bravely and, to warm applause, thanked the BBC and its audience.

But immediately after the ceremony, the two men shared a moment of pure love between two brothers in golfing combat – off-air, but not off-camera. That powerful, unguarded moment, which comes towards the end of SEVE The Movie, may just be the most heartbreaking you will ever see on film. It is the image which you will remember long after the documentary has ended.

SEVE The Movie verges into drama-doc territory, switching repeatedly between a beautifully-filmed reconstruction of the Spaniard’s youth, and archive footage of Ballesteros’s golfing career. Fans wanting to max out on Seve’s greatest moments may feel as if they wanted slightly more Ballesteros, and less of the film-within-a-film, but there’s no denying that Jose Luis Guttierez, who plays the young Seve, is a remarkable find, and the time spent retracing Seve’s journey towards a career as a professional golfer is both entertaining and revealing, showing how a man who could be equally charming and challenging developed as a fascinating if often slightly flinty character.

For golf fans, there’s plenty of footage of Seve’s five Majors, his heroics in The Ryder Cup (usually with Olazabal beside him), and of course a wealth of other action showing how this mercurial man came to dominate the sport in the late seventies and eighties. And although Seve’s later career as a successful golf course architect is not covered in the movie, visitors to his spiritual home in the UK, The Shire London Golf Club in north London where he designed his only UK golf course, will recognise the Spaniard’s uncompromising personality in every hole they play there.

Extraordinary and emotional – like the maestro himself – SEVE The Movie tantalises and leaves you wanting to spend more time with one of sport’s greatest personalities. Fittingly, as this iconic golfer, who for sheer charisma arguably surpassed golfing titans such as Nicklaus, Palmer and Woods, was only 54 when he died. We all wanted more time with Seve: but we have a superb tribute in this revealing documentary which will move you to tears of joy, regret and nostalgia at days gone by.

Review by The Shire London, www.theshirelondon.com, which features the only Seve Ballesteros golf course in the UK.