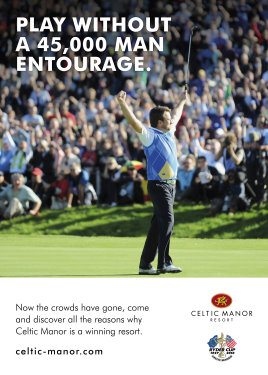 The Celtic Manor Resort, host venue of the 2010 Ryder Cup, is launching a new London Underground advertising campaign, as it seeks to capitalise on bringing one of the world’s biggest sporting events to Wales for the first time.

The campaign sees Celtic Manor use iconic images from Europe’s nail-biting Ryder Cup victory to promote itself to London’s Underground commuters and drive visitors to the five-star resort, which is ideally located just two hours from England’s capital.

The campaign gets underway this week from 8 November with a combination of 48 sheets and escalator panels on display at 25 busy station sites, including Bank, Bond Street, Covent Garden, Green Park, Holborn, Knightsbridge, Leicester Square, Oxford Circus, Piccadilly Circus and Tottenham Court Road, with 16 sheets set to run from 21 November to 4 December.

The 48 and 16 sheet adverts feature the iconic image of European Ryder Cup golfer, Graeme McDowell, celebrating his match-deciding putt on the 16th green of the resort’s Twenty Ten Course.

Featuring the words “Play without a 45,000 man entourage” the ads draw reference to the 45,000 fans per day that packed into the resort during the Ryder Cup while reminding golfers they can now enjoy the peace and tranquility of the beautiful Usk Valley as they play their own round in the footsteps of the tournament heroes.

The escalator panels will feature a selection of five main images, four from the Ryder Cup and one of the Twenty Ten Course’s picturesque 14th hole. With the words “More than a world class golf resort”, the final advert also includes pictures of some of the resort’s other main attractions which include luxury spas and health clubs, award-winning restaurants, outdoor activities and children’s amenities.

Commenting on the launch of the four-week campaign, Gareth Rees Jones, Marketing and Commercial Director at The Celtic Manor Resort, said: “It’s important that we build on the success of last month’s Ryder Cup to sustain our profile and remind people that we are more than just a world-class golf venue.

“With more than three million journeys made every day on the London Underground, we feel it is the perfect location to project these messages to business commuters who can escape the city and arrive at our resort retreat within two hours for a golfing trip or a family leisure break. We want to build the Celtic Manor brand still further, giving people the opportunity to come and enjoy the fantastic facilities our venue has to offer.”