Caddie App puts Hole by Hole Intelligence in Every Pocket 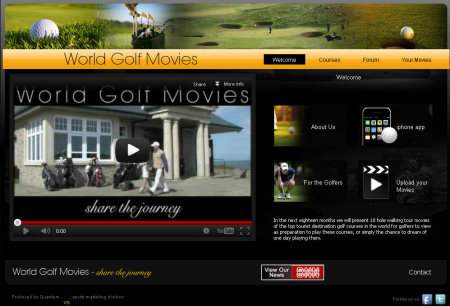 Each 25-minute walking tour is narrated by local caddies who provide seasoned instruction and strategy on how to play every shot all the way around.

World Golf Movies is now building a movie-app for Gleneagles, host of the Ryder Cup in 2014 and Castle Stuart, host of the Scottish Open. WGM plans to produce 30 more movie-apps in the coming year.

“Our movie-apps will give golfers the edge they need,” said Don Snyder, president and CEO of WGM, and a celebrated American novelist and screenwriter who caddied for two seasons inSt. Andrews.

”Having the chance to study the ground in advance, with a caddie’s instruction is the perfect way to prepare to play any of the world’s great courses.”

Snyder worked up the idea for WGM in 2008 and 2010 when he caddied first at Kingsbarns and then at the Castle Course and the Old Course, trying to learn all he could from his fellow caddies as he prepared to caddie for his son on his first pro tour this past winter in Houston, Texas.

Snyder’s journey of caddying in Scotland and for his son, Jack, on his first pro tour comprises his tenth book which will be published by Doubleday as ‘Walking with Jack’ in the spring of 2013.

During these two tours of duty in Scotland, Snyder discovered that the typical golfer who travels around the world to play the great Scottish courses usually arrives on the first tee blind, without a strategy for how to attack the 18 holes in front of him.

“He has his digital sky caddie hanging from his bag to give him distances, a stroke saver yardage book falling from his pocket, the wind is howling, and his caddie is a total stranger starting out with him on a four-hour blind date,” said Snyder.

Shelling out thousands of dollars and travelling thousands of miles to walk blindly made little sense, said Snyder. “Most golfers will only play these courses one time, and they want to play their best. Our movie-apps will help them do just that.”

Each movie-app retails for $9.99 on iTunes, and World Golf Movies shares the revenue with the golf courses.