The ‘Bridport’ Case: a Successful Outcome or another Can of Worms? 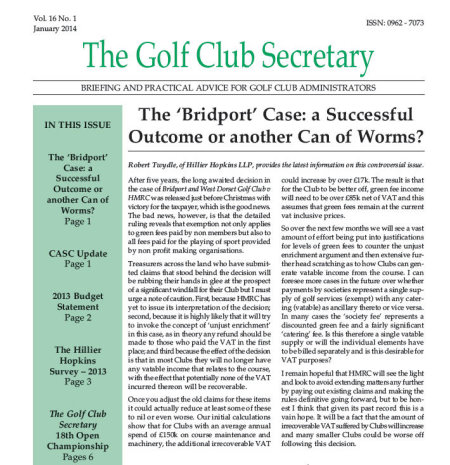 After five years, the long awaited decision in the case of Bridport and West Dorset Golf Club v HMRC was released just before Christmas with victory for the taxpayer, which is the good news. The bad news, however, is that the detailed ruling reveals that exemption not only applies to green fees paid by non members but also to all fees paid for the playing of sport provided by non profit making organisations.

Treasurers across the land who have submitted claims that stood behind the decision will be rubbing their hands in glee at the prospect of a significant windfall for their Club but I must urge a note of caution.  First, because HMRC has yet to issue its interpretation of the decision; second, because it is highly likely that it will try to invoke the concept of ‘unjust enrichment’ in this case, as in theory any refund should be made to those who paid the VAT in the first place; and third because the effect of the decision is that in most Clubs they will no longer have any vatable income that relates to the course, with the effect that potentially none of the VAT incurred thereon will be recoverable.

Once you adjust the old claims for these items it could actually reduce at least some of these to nil or even worse.  Our initial calculations show that for Clubs with an average annual spend of £150k on course maintenance and machinery, the additional irrecoverable VAT could increase by over £17k.  The result is that for the Club to be better off, green fee income will need to be over £85k net of VAT and this assumes that green fees remain at the current vat inclusive prices..

So over the next few months we will see a vast amount of effort being put into justifications for levels of green fees to counter the unjust enrichment argument and then extensive further head scratching as to how Clubs can generate vatable income from the course.  I can foresee more cases in the future over whether payments by societies represent a single supply of golf services (exempt) with any catering (vatable) as ancillary thereto or vice versa.  In many cases the ‘society fee’ represents a discounted green fee and a fairly significant ‘catering’ fee.  Is this therefore a single vatable supply or will the individual elements have to be billed separately and is this desirable for VAT purposes?

I remain hopeful that HMRC will see the light and look to avoid extending matters any further by paying out existing claims and making the rules definitive going forward, but to be honest I think that given its past record this is a vain hope.  It will be a fact that the amount of irrecoverable VAT suffered by Clubs will increase and many smaller Clubs could be worse off following this decision.