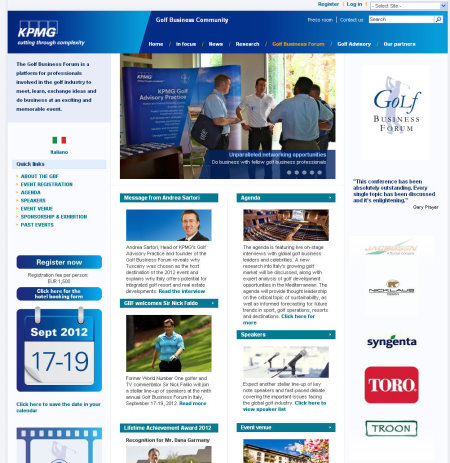 Italy is perfectly positioned to benefit from growing domestic demand for golf and international golf tourism, according to new research compiled by KPMG’s Golf Advisory Practice.

With the golfing world turning its attention to Italy for the European Tour’s BMW Italian Open, 13-16 September followed by the annual KPMG Golf Business Forum at the Renaissance Tuscany Il Ciocco Resort & Spa, 17-19 September, the report shines a light on a country that could be European golf’s sleeping giant.

With growing media interest in Italian tournament professionals including Francesco Molinari, who will tee it up with Team Europe at The Ryder Cup later this month, plus teenage sensation Matteo Manassero, a two-time winner on the European Tour, the number of golfers in Italy could continue to rise, while the established tourism market could convert more of the country’s 35 million foreign visits per year into higher-yielding golf holidays.

The report – prepared with the support of Fondazione Campus Lucca, and to be launched at the KPMG Golf Business Forum on September 18 – reveals the number of golf courses and golfers inItalyhas doubled in the past two decades. Specifically:

However, the report also reveals thatItalyis not realizing its potential:

Commenting on the report’s findings, Andrea Sartori, head of KPMG’s Golf Advisory Practice, said: “Something has happened with the Italian golf market in the past few years that makes it interesting. Some regions in Italy have finally recognized the socio-economic benefits that golf tourism can generate.

“Furthermore, the international success of Matteo Manessero together with the Molinari brothers and other young golfing talents has acted as a catalyst in attracting significant media attention for the game, which provides great exposure for golf and is very important in generating additional local demand.”

Dr. Sartori continued: “Despite the economic crisis, the outlook for the development of integrated golf resorts and master planned communities in the country is still positive.Italyis still a large economy with a strong domestic economic power and a tourism product that is second to none. The development of integrated golf real estate is a question of domestic and international economic recovery, the return of confidence of buyers and developers, together with the provision of bank financing for project development and to real estate buyers, something which will probably happen only in the mid term.

“Nevertheless, there is no doubt that Italy possesses all the key ingredients for the successful development of a larger golf population, golf resorts and communities, as well as stand-alone facilities.”

The survey results will be addressed by key industry professionals – including Sir Nick Faldo, Sir Rocco Forte, Costantino Rocca and Rio 2016 Olympic golf course designer Gil Hanse – at the Golf Business Forum, to be held at the Renaissance Tuscany Il Ciocco Resort & Spa, September 17-19, 2012. (For more information about the event and to register please visit www.golfbusinessforum.com.)

The full report will be available for download, free of charge, after 18 September on www.golfbusinesscommunity.com