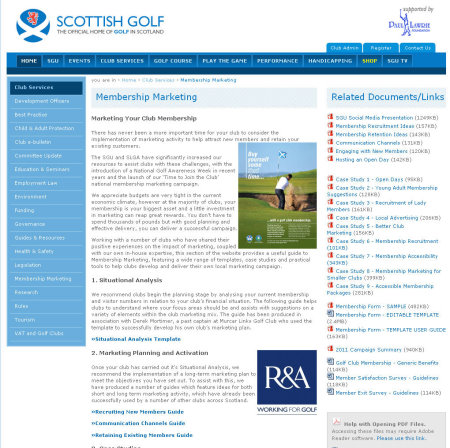 In a bid to capitalise on the popularity of golf over recent weeks, the Scottish Golf Union (SGU) and Scottish Ladies’ Golfing Association (SLGA) have launched their latest marketing campaign to encourage golfers to join their local club.

With two fantastic events taking place in Scotland, The Open Championship at Muirfield in East Lothian and the Aberdeen Asset Management Scottish Open at Castle Stuart, both played in glorious weather, the SGU and SLGA hope to encourage nomadic golfers and lapsed members to consider taking up membership at one of the country’s 578 clubs.

The first stage of the advertising campaign will see large format posters displayed in gyms and 5-a-side football centres across Scotland, while a series of on-line newspaper and sports websites will also be used to target golfers and competitive sportsmen and women, predominantly aimed at the 18 – 45 year-old market.

With Scotland’s golf club membership in decline over the past five years, the governing bodies have been working with clubs to provide increased marketing support to help attract new members, giving guidance on running Open Days, creating local marketing campaigns and advice on improved price segmentation. Despite the national decline, many clubs have seen an upturn in membership numbers, with more than 30% of clubs recording an increase in 2011-12, by adopting a more proactive approach.

“We launched our first ever Golf Awareness Week back in 2009 and have continued to provide national marketing support to clubs since then. This year’s campaign was deliberately timed to coincide with a high profile fortnight of golf in Scotland, and there could have been no better advert for golf than the fantastic scenes we witnessed on TV and for those spectating at Castle Stuart and Muifield,” said Ross Duncan, Marketing and Sponsorship Manager for the Scottish Golf Union.

“The weather has finally been on our side this summer, and we are hearing great reports from clubs and their members on the fantastic condition of their courses all over Scotland, which we hope clubs can harness in a positive way to get more people out playing and joining or rejoining their club.”

“Clubs need to attract a younger audience and the advertising campaign we have used targets that market and communicates the benefits of joining a club to those consumers. We know we can’t wave a magic wand, but this campaign, combined with the hands-on work we are doing with clubs through our Development Officers, helps position golf club membership in a positive way,” added Duncan.

A range of Membership Marketing tools and resources, to help clubs plan and activate their own local campaigns, are also available on the SGU website at http://www.scottishgolf.org/go/club-services/membership-marketing