The R&A and the United States Golf Association (USGA), golf’s governing bodies, have announced proposed changes to the Rules of Golf that would prohibit anchoring the club in making a stroke. 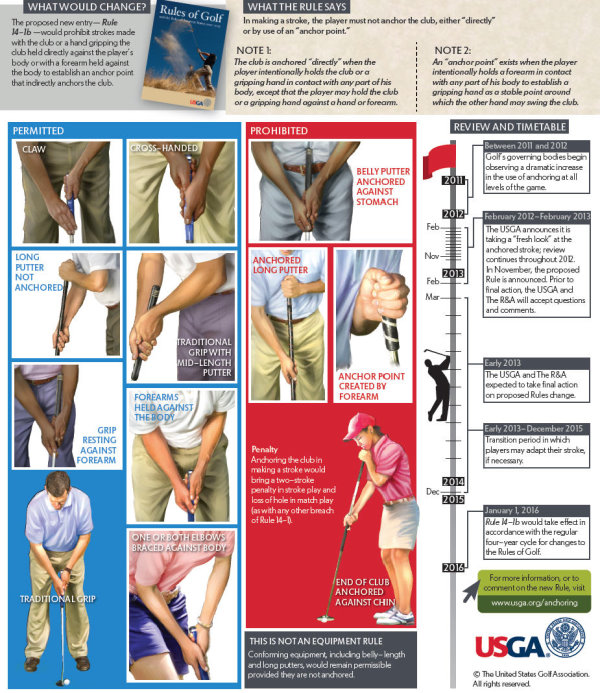 The proposed Rule 14-1b, which follows an extensive review by The R&A and the USGA, would prohibit strokes made with the club or a hand gripping the club held directly against the player’s body, or with a forearm held against the body to establish an anchor point that indirectly anchors the club.

The proposed new Rule would not alter current equipment rules and would allow the continued use of all conforming golf clubs, including belly-length and long putters, provided such clubs are not anchored during a stroke. The proposed Rule narrowly targets only a few types of strokes, while preserving a golfer’s ability to play a wide variety of strokes in his or her individual style.

Prior to taking a final decision on the proposed Rule, The R&A and the USGA will consider any further comments and suggestions from throughout the golf community.

“We believe we have considered this issue from every angle but given the wide ranging interest in this subject we would like to give stakeholders in the game the opportunity to put forward any new matters for consideration,” said Peter Dawson, Chief Executive of The R&A.

The proposed Rule change would take effect on 1st January 2016, in accordance with the regular four-year cycle for changes to the Rules of Golf. This timetable would also provide an extended period in which golfers may, if necessary, adapt their method of stroke to the requirements of the Rule.

For more information about the newly proposed Rule, as well as additional information including videos and images of strokes that would be allowed or prohibited by the proposed changes to Rule 14-1, visit www.RandA.org/anchoring or www.usga.org/anchoring

The proposed change would re-label current Rule 14-1 as Rule 14-1a, and establish Rule 14-1b as described below:

14-1b Anchoring the Club

In making a stroke, the player must not anchor the club, either “directly” or by use of an “anchor point”.

Note 2:  An “anchor point” exists when the player intentionally holds a forearm in contact with any part of his body to establish a gripping hand as a stable point around which the other hand may swing the club.