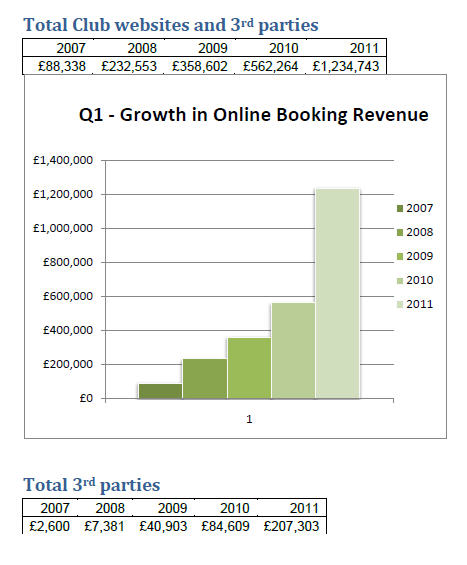 Online bookings went into overdrive in the first three months of 2011 according to BRS Golf, growing by an amazing 120% over the same period in 2010.

With over 560 golf clubs in the UK and Ireland now using their market leading online diary, booking and tee time management system, BRS Golf saw over £1.2 million in online tee time booking revenues being made via their systems in clubs all around the UK and Ireland.

This result was more than double the booking revenues for the same quarter last year, which in 2010 was a cool £582,000. Of all the bookings taken in the first three months of 2011, over 83% are being made directly through club websites and 17% through third parties, and this is in line with the 2010 results.

According to BRS Golf, the figures for the second quarter of 2011 are looking good too, and Dr. Brian Smith is delighted with the way the market is going: “Obviously for much of the UK and Ireland, the weather in the first quarter of 2011 has been much better, compared to the same time in 2010 when clubs were snow-bound or frozen in. But the weather in itself doesn’t explain the massive increase of 120%.”

“Our own customer base has grown by 50 clubs in the same time period, and this reflects a much higher sales growth than we’ve previously experienced. It also tells me that many more clubs are now recognising the value of marketing and selling their spare tee times, and they can of course do this with the BRS Golf system while still enabling their members to enjoy playing whenever they want.”

“That sort of flexibility has obvious advantages when so many clubs are looking to develop alternative income streams to the traditional membership subscriptions, and when society income is also under pressure.”

“With 80% or so of the market for playing golf being pay as you play, and with subscription golf being an increasingly expensive luxury, the BRS Golf system is widely seen as the essential management and marketing tool for any golf club.”