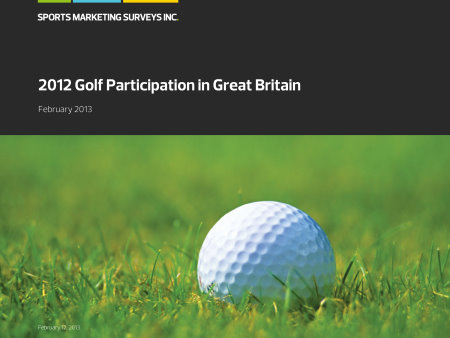 The recently published ‘2012 Golf Participation in Great Britain’ report by leading sports research consultancy SPORTS MARKETING SURVEYS INC. has been well-received by the industry despite its clearly negative news concerning golf statistics for the last year.

The report outlines some of the lowest participation rates for a decade after one of the wettest summers on record, but this has to be balanced by the fact that it was one of the busiest summers in international sport for many years.

SPORTS MARKETING SURVEYS INC. believes the report underlines key challenges facing the industry as a whole. However, the level of detail on GB golfers, their playing habits, attitudes and demographics, is enabling leading companies to identify business opportunities for their products and services.

Richard Payne, Senior Manager of Sports, for SPORTS MARKETING SURVEYS INC., said: “As we expected, the report reveals that 2012 was a very difficult year for all involved in the golf industry with a combination of incredibly poor weather and three major sporting events (European Championships, Olympic and Paralympic Games) combining to impact significantly on the number of golf participants and the subsequent number of rounds that were played.

“The major sporting landscape is not quite so packed for 2013 which should help golf, but this survey identifies a drop in the number of golfers by more than 400,000, the worst return for a decade. This has to be something of a wake-up call for all involved in the industry.”

The report details that in the UK, 2012 saw over 3,000 mm of rain, or nearly three times the average of 1,154 mm over the last 30 years. The SPORTS MARKETING SURVEYS INC. 2012 GB Rounds Played Monitor revealed that over the course of the year the number of rounds played across GB had fallen 13% compared with 2011, with the Olympic and Paralympic Games costing GB between 850,000 and 900,000 rounds in August alone.

Participation rates for the year show that the number of golfers in Great Britain has dropped to its lowest level in the past decade, at just over 3.5 million individuals who have used a full-length golf course in the last 12 months, a decrease of more than 400,000 from 2011.

The report is packed with information about changes in frequency of play among golfers, their playing habits, their attitudes to the sport, how other sports affect their golf participation, and their demographics. There are easy-to-digest statistics on who is playing (age/gender etc), where they are playing (full-length courses/driving ranges etc) and there is a wealth of other market information of value to anyone in golf management. The report identifies the need to improve the offering at facilities for core golfers, the value of continued government funding to attract new golfers, and discovers a decline in overall use of practice facilities at golf venues.

Richard Payne added: “Of course, in amongst all the challenges to boost participation there are also great opportunities for forward-thinking companies to engage with golfers through their products and services, and a number of leading organisations have ordered this report on that basis as part of their detailed market research.

“We are pleased with the acceptance of this report from the wider industry. It isn’t all bad news either. In other recent research carried out with golf club members we have been encouraged. This has revealed that a great many golfers want to get out there and enjoy the game this summer.”

This research reports that 51% of respondents said they expected to play more golf in 2013, while only 2% thought they would play less. Some 74% said that the poor weather in 2012 had proved to be a negative impact on their play.

“Increasing play frequency is almost more important than increasing overall golfer numbers,” said Payne. “We know that whilst core golfers may only account for 40% of total golfers, they contribute more than 75% of the expenditure on the sport.”

* The 2012 Golf Participation in Great Britain report’s results are based on interviews with a nationally representative sample of 2,000 residents of Great Britain aged at least 16 years. Interviewing was carried out by professional interviewers as part of an omnibus survey covering all areas of Great Britain.