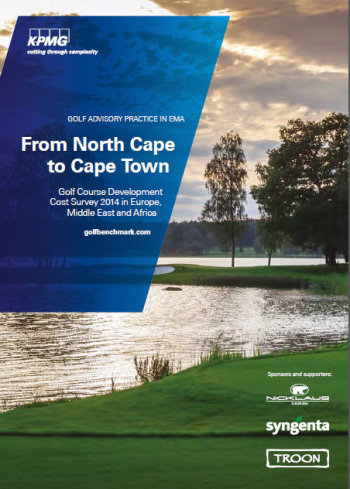 Today KPMG’s Golf Advisory Practice publishes the third edition of the Golf Course Development Cost Survey at the annual HSBC Golf Business Forum. The report, which provides invaluable benchmark figures for developers and investors in the golf industry, was welcomed by key golf business professionals who debated the research findings during an engaging panel discussion.

In this major research initiative, KPMG collected information from owners and developers of over 100 recently constructed golf facilities in Europe, the Middle East and Africa (EMA) covering the planning and construction costs of their projects. Furthermore, KPMG asked respondents about issues and challenges they have faced during the development process.

Based on KPMG’s findings, developing a new 18-hole golf course in the EMA region cost close to 6 million Euros on average in the last 5-6 year period. This is a 31% increase compared to the 2008 survey findings. It must also be highlighted that the majority of the recent developments are of higher quality than in previous years, which is reflected by the increased average costs.

The value that a quality golf course can add to nearby or adjoining real estate developments or tourist destinations is widely recognized. According to 46% of the survey respondents, the resulting real estate price premium is likely to surpass 20%.

KPMG’s survey reveals that obtaining the necessary permits has been the biggest challenge for developers in recent years, indicated by 35% of the respondents. A quarter of the respondents had difficulties obtaining financing and a quarter had had trouble staying within their original budget.

Andrea Sartori, head of KPMG’s Golf Advisory Practice in EMA, said: “After a few very tough years following the global credit crunch and the wider unfolding of the economic downturn in 2008, it is good to see stronger activity in today’s lifestyle real estate market and a revival of golf projects, with some prominent transactions taking place in various parts of the world. We have managed to identify more than 400 active golf projects in the EMA region since early 2008, including new developments as well as full renovations or extensions of existing facilities.”

In order to compliment the findings of the survey, KPMG also approached 40 golf architects for their opinion on development hot spots and market trends. According to the architects, emerging golfing regions such as China, India, Russia & CIS, South America & the Caribbean and South-East Asia provide the biggest opportunities for golf development. Nevertheless, the UAE and Eastern Europe were also mentioned among the development hot spots, although they were considered slightly less attractive than in the previous surveys.

Andrea Sartori added: “I would like to thank all golf course developers, owners, operators and architects who participated in our research for their valuable input. I would also like to express my gratitude to Nicklaus Design, Troon Golf and Syngenta, who have supported this research.”

Together with other industry research materials, KPMG’s ‘Golf Course Development Cost Survey’ is available for download on www.golfbenchmark.com.