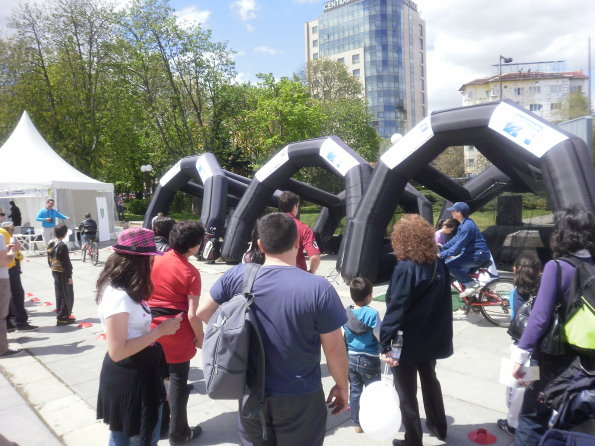 As football – once described as ‘the opium of the masses’ – was taking centre stage in the European Championships, another sport was being introduced to a receptive and inquisitive public in the former Russian republic of Ukraine.

While, at the nearby soccer stadium, football was the name of the game, in a city centre square of Ukraine’s capital, Kiev, introductory lessons in Golf were on offer to all-comers, courtesy of the European Development Roadshow (EDR).

The Ryder Cup European Development Trust (RCEDT) has extended its support of free coaching at European Tour events by joining The R&A, the European Tour and Nike Golf in funding this ground-breaking initiative allowing mums, dads and the kids, to undertake a one-to-one lesson on how to get started in this intriguing new sport.

The EDR visit was part of a comprehensive sweep of the region, being carried out between April and September, and taking in the nearby states of Bulgaria, Poland, and Slovenia, areas where the potential for golf growth is incalculable. In size Ukraine is second only to Russia.

And how those Eastern European family folk responded to this free opportunity to try out the sport in the specially-designed, blow-up facility, delivered by Provision Golf, after advice by experts on how to go about it!

When the schedule teed off in Bulgaria between 20th and 22nd April, 473 free five-to-ten minute lessons were given in three days, 30% of them to children. In a country that is increasingly recognising the attractions of the sport on the back of the staging of the PGAs of Europe UniCredit PGA Professional Championship of Europe at the Pravets Golf Resort and the Black Sea Rama Pro-Am, more than 90% of the people who received lessons had never tried golf before.

Such is the appreciation of golf there now that ‘The National Sports Panorama’ in Sofia, where the EDR was staged, attracted more than 20,000 people over the three days.

Then came Ukraine in mid-June when hundreds more benefitted from the chance to grip it and rip it. Such was its appeal that one little girl, keen to try her hand at giving the ball a swipe, cried and cried until she got her turn.

Next on this Eastern European ‘tour’ comes Poland’s road show, to be staged during their Festival of Stars event on 6-8 July and, finally, Slovenia in the Supernova Shopping Mall on 28-30 September.

And a clear hint that Ukraine is taking a similar, if longer term route towards adopting a golfing culture as the other European countries before them, came in a typical tribute to the road show from Sergey Kozyrenko, General Secretary of the Ukrainian Golf Federation.

“It was the first, true experience of public teaching for our amateurs who, at this event worked alongside the PGA Professional, our National Team coach, Russell Aden,” he enthused. “Their first reaction after two days was ‘it’s hard work!’– they were exhausted physically as well as mentally, but happy at the same time.

“I personally believe that it’s invaluable experience for them, so they could get a feel of the core elements of a golf professional’s life. They are the ones who might become the first Ukrainian golf professionals when the time comes.

“After nets were deflated at 9 pm, one young girl couldn’t help crying. She wanted to try it so badly, but couldn’t get to the nets before time ran out, one of the staff worked with her without the net. A couple of balls got lost in Dnieper river… but everybody around were so happy for the girl – nice, emotional happy-ending of the day – great job, everyone concerned.”

The aim of the European Golf Development Roadshow, which was successfully launched at a series of European Tour events by Provision Golf, is to take golf to well attended family shows to introduce golf to non golfers in a fun , non intimidating environment  and in a memorable way.

The free 5 -10 minute introductory lessons are given by local golf professionals of each country and the facility  acts as platform for the national PGA / Golf Association / Federation to offer initiatives on how people can take up golf.