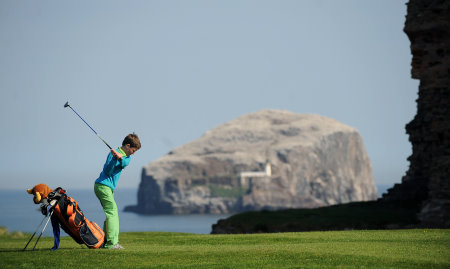 One of the biggest golfing tournaments in the UK’s sporting calendar is set to inject a bumper £1 million boost to East Lothian when it tees off next week.

The U.S. Kids Golf European Championship – which will see some of the best young competitors from around the world competing over five of East Lothian’s best courses – is predicted to bring in an estimated total of £1 million to the area, according to Susan Smith of the Economic Development & Strategic Planning service at East Lothian Council.

Businesses across East Lothian are now gearing up to benefit from the annual event which will see a record field of more than 560 youngsters aged 6-18 from countries as far afield as Mexico, Japan and Nigeria, competing for European Championship titles.

It is predicted that many UK and overseas competitors will also bring several members of their family along with them for a week-long stay, providing a further boost to the local community.

Susan Law, co-owner of The Mallard Hotel in Gullane, said: “The village and the local area certainly does well from the tournament. Around 90% of the businesses in the area are golf orientated but in this case it’s great to have these golfing families coming back every year to stay with us.

“There is a great buzz in the village during the competition and it’s great to see all the young competitors out enjoying themselves. It’s reassuring to see how next generation of golfing talent is being fostered. It’s a good sign of things to come.

“Our property looks on to the first tee so my husband often goes down to see some of our guests who are playing tee-off. It’s always nice to see our visitors do well.”

Catherine Gannon of Gannon Sports added: “It’s always nice when the tournament comes around as it brings a great influx of visitors from all around the world and it’s great for business in the village. It’s lovely to see such enthusiasm for the sport and the vibe it brings within the local community is really great.”

“We always try to be prepared for all eventualities, but with the Scottish weather it can be hard to predict.”

Guy Campanile, owner of The Old Clubhouse, said: “It’s a real boost to the local area and for all the businesses that serve the tournament. It’s sort of like a mini Open for us and we’re always fully booked during the week of the competition.

“We’re always fully prepared and make sure we have enough staff on to accommodate the extra visitors to the village.

“No matter the weather families pour in to the restaurant, though it does help if the sun is shining!’

Councillor John McMillan, East Lothian Council’s Spokesperson for Economic Development and Tourism, said: “Accommodation in the area is always as full as it could possibly be and with 500 competitors and their families eating out and using the local amenities, the area certainly gets a boost.

“There is so much to see and do and we are very happy that the kids get an opportunity to explore the diverse attractions that East Lothian has to offer.”

The U.S Kids Golf European Championship will take place over 27-29 May on five of Scotland’s most historic courses – Gullane No.2, Gullane No.3, Craigielaw Golf Club, Luffness New Golf Club and Longniddry Golf Club. Competitors will be split into age categories and each green will be modified for each age group, allowing players to complete each course in the same number of strokes as the top pros on the PGA Tour.