Hundreds join clubs as Wales ‘Picks it up’

Hundreds of golfers and would-be golfers joined clubs in Wales as part of Golf Awareness Week, living up to the slogan ‘Pick it up for the Ryder Cup.’ The week was run immediately after the Masters by Golf Development Wales, part of the Golf Union of Wales, and backed by the sport’s governing body the R and A, with special offers available all round the country.

More than 100 golf clubs in Wales took part in the week, offering free golf and coaching to demonstrate the benefits of golf and club membership in the biggest ever initiative run by Golf Development Wales.

Hundred of children took part in special festivals all round Wales, while clubs threw open their doors for people to come along to give golf a go and ‘Pick it up for the Ryder Cup.’

The scheme was heavily praised by clubs throughout Wales, for example Maesteg who picked up 12 new members in the week and also increased their junior ranks. 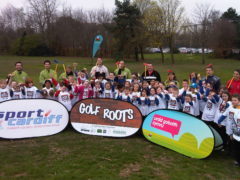 The impact was felt all over Wales and people took advantage of the good weather and special offers.

“It was great to see so many schemes all coming together and so many people around Wales taking the chance to play golf,” said Hannah Fitzpatrick, director of golf development for the Golf Union of Wales. “This was the biggest scheme we have ever run and of course it was perfect to do it in the year of the Ryder Cup.

“Our slogan was to ‘Pick it up for the Ryder Cup’ and plenty of people have done just that. Thanks to all the people who worked so hard to make it work, all the clubs who got behind it and have felt the benefit.”

There are plenty of examples of club schemes working in Golf Awareness Week. Gary Pugh, the professional at Tycroes near Ammanford, said, “We put out the posters and we have had quite a few people coming up to try out the course in Tycroes this week, plus I’ve been giving some free 10 minute lessons.”

There were 30 ladies at a taster day at South Pembs in Pembrokeshire – with 100 per cent signing up for follow on lessons.

Abergele also had some new members joining while Mold held a successful day for juniors with their junior members encouraged to bring along a friend to TriGolf sessions. Some of those juniors are set to join, as well as family members who tried the course at the same time.

In Mid Wales there were also plenty of successes to report, according to Ellen Jones, Senior Active Young People Co-ordinator at Powys County Council.

“We are pretty pleased, lots of people took up the trial membership as well – ladies, men and juniors,” she said.

“There were also Dragon sport events, for instance there were 120 at Newtown, 90 at Welshpool and Caersws.

“In my club Welshpool we had 18 for starter lessons and they all took up the three month trial membership – 12 ladies and six men. I think every club has seen an improvement in ladies, men’s and junior memberships.”

Cardiff too had a successful Ladies Night at Heath Park with 35 ladies turning up and looking to continue playing golf as the aim now is for Golf Awareness Week to maintain the momentum throughout Ryder Cup year and beyond.

D3 (Develop the Golfer, Develop the Person, Develop the Sport) is its three year development strategy which emphasizes how introducing beginners to golf also helps to build other personal life-skills because of the principles and values inherent in the sport.

Topgolf Callaway Brands has added The Belfry Hotel & Resort in North Warwickshire to its select roster of High Performance Partners.