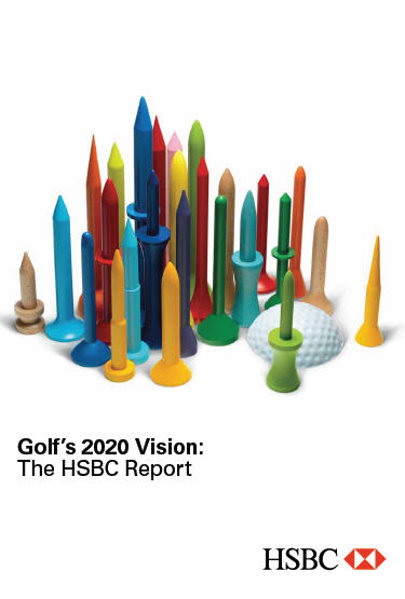 A major Asian presence in the world’s Top 10, low cost urban golf courses, new self-coaching digital “smart clubs”, short format golf, carbon positive courses and family friendly facilities will revolutionize the game of golf by the start of the next decade, according to a major new piece of research commissioned by global investor in golf HSBC to mark the 141st Open Championship this week.

HSBC has teamed up with leading consumer research agency The Futures Company to produce “Golf’s 2020 Vision”, a detailed look at the future of golf over the next eight years based on interviews with a host of leading industry experts and players such as Padraig Harrington, Colin Montgomerie, Gary Player and Annika Sorenstam.

Top players past and present are united in their belief that Asian golfers will make up one third of the World’s Top 10 by 2020 with golf legend Player seeing “several of the world’s Top 10 coming from Asia” and former World No 3 Paul Casey predicting the Top 10 will be “an equal split of Asian, European and US players”.

Key findings of the report include:

The research – which interviewed experts from the world of golf, media, gaming and the environment – revealed that Asia’s success will be fuelled by economic growth and the rise of the middle classes which has seen Asian consumers turning to leisure activities and children playing the game from an early age.

In China the number of golf courses has tripled in less than a decade and new low cost urban courses in inner cities will continue this trend. Between 2010 and 2020, Asia is set to double its share of global middle class consumption to 42%. By 2015, 98 million Chinese households are expected to be middle-class, compared with 52 million in 2010. India’s middle class is estimated to grow from 32 million households in 2010 to 53.3 million households by 2015.

In China, golf is perceived as a game that teaches children important personal values. Free golf training is offered in kindergartens and some parents are now prepared to spend up to 300,000 yuan ($43,940) a year on lessons for their children.

More top flight events will be added to the schedule in China and elsewhere in Asia. Gary Player highlights the importance of Asia in the development of golf: “Change is the price of survival. Being the first truly international player, it has been a pleasure to see the development of a global game. With the eyes of the sport now firmly focused on Asia, I can see several of the world’s top 10 coming fromAsiaand several more globally sanctioned tournaments hosted there by 2020.”

Back-to-back Open Champion Padraig Harrington agrees: “You only have to look at the European Tour’s schedule and see how many tournaments are now being hosted by Asia, whether in the Middle East or Far East.”

Asia has already become a centre of the women’s professional game, and much of the growth in participation across the world is coming from women’s golf. This will lead to changes in expectations about the facilities that clubs and courses need to provide to their members and create a platform for golf as a family game.

Golf clubs and golf courses will become more friendly and golf will become the way for men and women to share leisure time – as cycling has done in richer markets. There will be family rooms not bars, holes set up for younger players and certified women-friendly facilities.

World Golf Hall of Fame member Annika Sorenstam said: “We’ve seen a revolution in women’s golf the past 10 years and there’s no sign of it stopping. Asia is the focal point and I see this as something that will continue and even increase. The sport is spreading its way across Asia very quickly. We may see a shift from South Korea to China and possibly Japan.”

Advances in digital technology will change the face of coaching with “smart clubs” which memorize your grip and swing allowing golfers to analyse their performance and learn from their mistakes. The traditional card and pencil will be replaced by automatic scoring and lost balls will be a thing of the past thanks to sensory chips. The app will become a “virtual caddy” as smartphone and tablet software helps golfers make the right choices.

Gamers will become golfers and social gaming environments and family friendly golf video games will encourage people to move into the sport, not the other way around.

Increasing time pressures, and shortage of space in cities, mean that six and nine hole formats will emerge to complement the 18-hole tradition and golf will become a “quicker” game. Already courses are being designed with options to play six holes rather than eighteen, and France’s winning Ryder Cup 2018 bid, with its commitment to build hundreds of short urban courses, indicate the significance of this. Improved simulator technology will also increase opportunities for short virtual games in the heart of the city.

Ryder Cup winning captain Colin Montgomerie said: “Concepts such as a short form of the sport could become more common place. Some people don’t feel they have the time to play a full 18 holes and golf may need to seriously develop its own version of Twenty20 cricket in order to keep pace.

“This could certainly help more youngsters take up the sport, which is obviously vital. It could be a flagship event being hosted at night under floodlights, similar to what Formula One has achieved out in Singapore.”

Player adds: “I think that you will see a lot of changes in the future to make rounds of golf shorter and courses more accessible to the everyday golfer. For golf to grow there will have to be ways to play that will not take nearly as long to complete a round. Time is of the essence to everyone. We have the responsibility to design and build enjoyable courses for the masses, not just the low handicapper or professional.”

As golf is identified as a more active game requiring greater levels of fitness it will attract more young people and the lifespan of a golfer will increase.

According to Gary Player: “Golf is a lifetime sport. I worked hard at having a very long career, but the lifespan of a golfer is likely to get even longer as people are starting at an earlier age to watch their diet, health, and fitness and playing for longer so you could easily have a champion who is anywhere between 16 or 60.

“I am 76 years young and still playing in tournaments. Tom Watson nearly won the 2009 Open Championship at nearly 60 years old, and 14 year old Andy Zhang competed in this year’s US Open. It is amazing, and part of what makes golf such a wonderful sport.”

Italian rising star Matteo Manassero agrees, adding: “By 2020, I predict we will see younger winners than ever before, with these winners coming from developing golfing nations such as those in Asia, the Middle East and even South America following the next Olympics.”

Golf courses will continue to provide the backbone of high profile tourism investment in many parts of world. Golf tourism is growing quickly in Asia and the Middle East, which currently has the world’s most profitable courses and new courses are being developed as part of national tourism strategies in countries as far apart as Vietnam, Abu Dhabi and Cuba.

Sustainability will also become increasingly important and sustainable course management will be a cost saving not a cost. Golf will become a centre of expertise in water management, conservation, and biodiversity and the first carbon positive courses will open by 2020.

Former World No 3 Paul Casey commented: “It’s an incredible time to be a professional golfer. The speed and pace of development in all aspects of golf is astounding – from the geography of golf, to the technologies available, to the marketing of the sport, it’s definitely a changing game. Within 10 years, I predict that the Top 10 in the world will be made up of an equal split of Asian, European and U.S.players.”

HSBC Global Head of Sponsorship and Events Giles Morgan said: “This is a truly incredible time for golf. Golf is evolving and evolving fast and as a proud patron of The Open Championship and a global investor in golf we wanted to see where the game is going next.

“It’s been fascinating to work with The Futures Company and take a glimpse into the future of golf eight years from now. Our own experience with the HSBC Champions event in China has given us a flavour of the future and it’s been truly inspiring to see this new generation of Asian players emerging – Andy Zhang is the latest example and we’re immensely proud of the fact that he is a graduate of the HSBC Junior Golf Programme.

“As a global banking and financial services organisation, we aim to be where the growth is, connecting customers to opportunities, enabling businesses to thrive and economies to prosper and, ultimately, helping people to fulfil their hopes and realise their ambitions – our sponsorship of golf allows us to do this in a sporting context.”