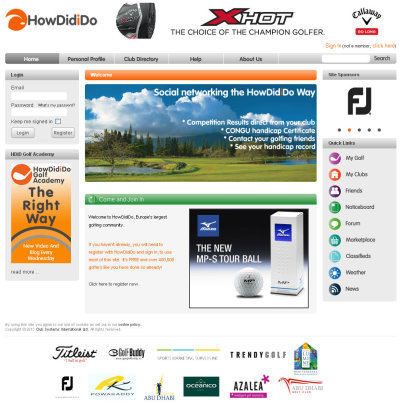 In the month leading up to The Open around 105,000 more golfers played in official club competitions compared with the same period last year – an increase of almost 16 per cent.

After what seems like an eternal spiral of downtrend updates, the British golf industry finally has some positive news with golfers across the UK and Ireland downing their tool boxes, laptops and TV remotes and heading out onto a sun-kissed golf course.

HowDidiDo, Europe’s largest golfing community, has reported a surge in numbers playing in club competitions this summer. In the month leading up to The Open, around 105,000 more golfers played in official club competitions compared with the same period last year – an increase of almost 16 per cent.

This means great news for golf clubs that will be experiencing increased member turnouts and the positive knock-on effect of additional ancillary revenues. It is hoped that the increase in participation will also provide a halo effect for golf equipment retailers.

HowDidiDo Media’s managing director, Barry Dyett, commented: “It would appear that the past few weeks of great weather have driven golfers back to their clubs.

“With most commentators predicting a further prolonged spell of fine weather, we hope to see a continued upward curve throughout the remainder of the summer and the message to clubs is to ‘make hay while the sun shines’.”

HowDidiDo’s database now holds in excess of 21 million rounds of golf along with the handicaps, results and scores of more than 1,300,000 UK golf club members. Around 2,000 golf clubs currently use the HowDidiDo system, allowing members to analyse their game and compare performance with other players – at their own club or across the entire HowDidiDo network. It is also used for official CONGU handicapping and competition results.

More than 400,000 golfers currently use the HowDidiDo website which is now arguably the largest and most up-to-date database of golfers in Europe.

The brand is also the driving force behind two of the best supported amateur golf events in the UK: the annual Titleist Order of Merit – the largest golf event of its kind in the country –and the HowDidiDo National Matchplay Championship.

It is also currently engaged in a widespread campaign with the BOSS Watches H1 Club to reward all its registered golfers with a luxury timepiece should they record a hole-in-one during an official club competition. Since the programme launched in April, more than 500 HowDidiDo golfers have already received a limited-edition watch worth £225.