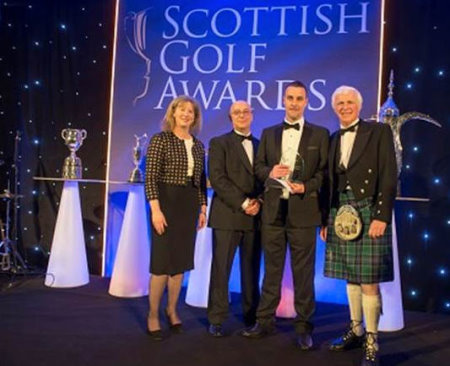 Fortrose & Rosemarkie Golf Club has been named the Country’s No.1 Club for young golfers after winning the 2013/14 RBS Junior Club of the Year at the 2014 Scottish Golf Awards – ClubGolfScotland.

Presented at the star-studded Hilton Glasgow event, the Black Isle Golf Club with a unique links course in the Scottish Highlands beat off stiff competition from Peebles, Prestonfield and Bathgate after a landmark 125th Anniversary year in which junior golf took centre stage.

Prestonfield coach Liz Taylor was the night’s other big winner, picking up the hotly-contested RBS Volunteer of the year accolade for her dedication to developing junior golf at the Edinburgh venue.

Upon receiving the £1,500 first prize for return investment into the juniors at Fortrose & Rosemarkie, club secretary Mike MacDonald said: “I was totally unaware that we were going to win the award especially as we were up against some stiff competition for the award but to win it is just a fantastic achievement for the club.

“We’ve had a lot of recognition already and I think, on the back of this, we can take the club forward even more. For the coaches it means a lot as well because those are the guys that put the hard work in.

“Obviously, we had such a fantastic year last year with it being our 125th anniversary at the golf club. There was just so much going on but I think the enthusiasm of the coaches was the key thing that helped us to deliver everything we wanted to. They have given up so much of their time for the kids and our coaching is a massive thing for encouraging them to play.

Over the course of 2013, the Highland club invested heavily in new practice facilities and coaching resources for their juniors and has experienced an increase in young members as a result, from 94 to 131, making it one of the busiest sections in the country.

Similar success was experienced at Prestonfield, where 2013/14 RBS Volunteer of the Year Liz Taylor oversaw the introduction of golf for the first time to over 100 children.

Having become the club’s first ClubGolf Co-ordinator at the beginning of 2013, Liz has spearheaded the funding and construction of two brand new par-3 practice holes, delivered and organised coaching for a total of 124 children on Tuesdays, Saturdays and Sundays and even began sessions for ladies interested in taking up the game.

Delighted to be named Scotland’s top golfing volunteer and receive £500 for her club, Liz said: “Winning the RBS Volunteer of the year award means that all of the hard work and effort that you put in: i.e. the admin side of it and the organisation of the classes; getting all of the coaches ready; drawing up rotas; communicating with the parents and coaches, has paid off. I put in a lot of hours but the rewards are absolutely massive and it just means the world to me. I’m delighted.

“Having 74 children joining the club in 2013 is a massive achievement for us but the most important thing is making sure the kids keep coming back. That is what makes it special for us as coaches.

“We’ve heard that some of them keep their golf clubs under their beds and their membership cards under their pillows because they are just so excited about ClubGolf they can hardly sleep. Things like that make this the best job in the world.”

Bruce Cook, Head of Group Sponsorship at RBS, was pleased to see Scotland’s top junior club and volunteer rewarded for their dedication and congratulated this year’s successful candidates on their achievements.

“The 2014 Scottish Golf Awards was another great event and RBS is very proud to sponsor the Volunteer and Junior Club of the Year awards. As with our ClubGolf partnership, we think it is important to recognise the grass roots efforts that ultimately drive the future of the game.

“Both of this year’s winners have shown great commitment and a collaborative spirit to grow the game. As ClubGolf continues to bring more kids into the game, we rely on individuals like Liz Taylor and those involved at Fortrose & Rosemarkie to keep it going strong.”

Watching on proudly as each of the deserving RBS Awards winners was recognised in front of a 650-strong crowd, including 1995 Ryder Cup-winning Captain Bernard Gallacher, ClubGolf Manager Jackie Davidson said: “If it wasn’t for our hard working clubs and dedicated volunteers, the ClubGolf programme simply couldn’t exist, so I’m delighted to see Fortrose & Rosemarkie and Prestonfield’s Liz Taylor recognised for their success over the last year with the 2013/14 RBS Awards.

“These awards are just a small token of our thanks for their work in introducing and retaining children in golf, which will stand their clubs in good stead for the future.

“Of course, we mustn’t forget the many other applications we received in this particularly strong year. All of these together give me great confidence that golf at grass roots level in Scotland is in good hands.

“Hopefully learning more about the achievements of this year’s winners can inspire even more clubs to recognise the importance of having a strong junior section and how the ClubGolf programme can help them to achieve this.”