AccuWeather reports an active storm track across the North Atlantic Ocean will produce a high number of storms tracking across western and central Europe this winter.

Eastern Europe will experience a more tranquil and mild winter; however, a significant cold shot or two is predicted during the second half of the season.

Storms to frequent British Isles with rain and wind

A stormy weather pattern will set in before wintertime with active weather during the second half of October across Ireland and the United Kingdom.

At least one named windstorm is expected during this time before a lull in windstorms in November. However, storm systems may still bring locally heavy rainfall at times during the month.

The most active period of weather will be during the official winter months from December through February. December and February will bring the potential for multiple windstorms within a week.

The greatest wind threat is expected across Northern Ireland and Scotland while significant, but less frequent, damaging wind events will impact Ireland and the rest of the United Kingdom.

“Above-normal rainfall across the U.K. and Ireland will result in another winter of flooding problems,” AccuWeather Senior Meteorologist Alan Reppert said.

Frequent storms from the Atlantic will keep cold air at bay as milder air from the ocean results in near- to above-normal temperatures.

The lack of cold air will limit snowfall throughout the season; however, brief shots of cold air may produce some low elevation snowfall at times.

Locations with the greatest threat for impactful snowfall include Edinburgh and Sheffield.

Persistent storms to cause wet, mild winter from France to Germany

A storm track that will shift north and south across western Europe will lead to numerous impacts across France, Belgium, the Netherlands and Germany this winter.

The greatest threat for damaging winds will be across Belgium and the Netherlands as well as central and northern Germany.

Areas that are most likely to experience a damaging wind storm include Brussels, Belgium, Amsterdam, Netherlands and Hamburg and Berlin in Germany.

While the most frequent storms are expected during January and February in these areas, damaging wind events are possible as early as November in northern Europe.

France will have a period of stormy weather in December followed by more frequent storms from February into March.

A combination of damaging winds and localized flooding will be possible with the strongest storms.

“When the frequency of storms increases in January and February, the threat for flooding will increase across southern Germany,” AccuWeather Meteorologist Tyler Roys said.

Some of the risk areas will include those that suffered from devastating flash flooding in early summer. Locations with a heighten risk for significant flooding include Frankfurt and Stuttgart.

Overall, the winter is expected to yield above-normal temperatures as Atlantic air dominates much of the season, preventing cold air over northern Scandinavia from rushing southward.

Mild weather will prevail in areas from northern Spain to southern France and Italy throughout the winter; however, rainfall during the second half of the season will increase the threat for flooding.

From late January through February, the primary storm track will shift southward guiding frequent storm systems into France. The risk for flooding will extend from northern Spain through southern France and into the Alps.

Mudslides will be possible in the foothills of the Pyrenees and Cantabrian Mountains of Spain, while above-normal snowfall is expected in the highest elevations.

Prior to the late-season storms, winter will be mild with above-normal temperatures predicted during December and much of January with below-normal snowfall in the mountains.

While the lower elevations of the Alps will experience rainfall as mild air dominates, higher elevations and ski resorts can expect significant late-season snow that will likely result in an extended season.

Across Italy, the higher terrain will get an increase in snowfall late in the season, while the lower elevations receive beneficial rainfall.

“Rainfall throughout the winter will be largely beneficial across northern Italy,” Roys said. 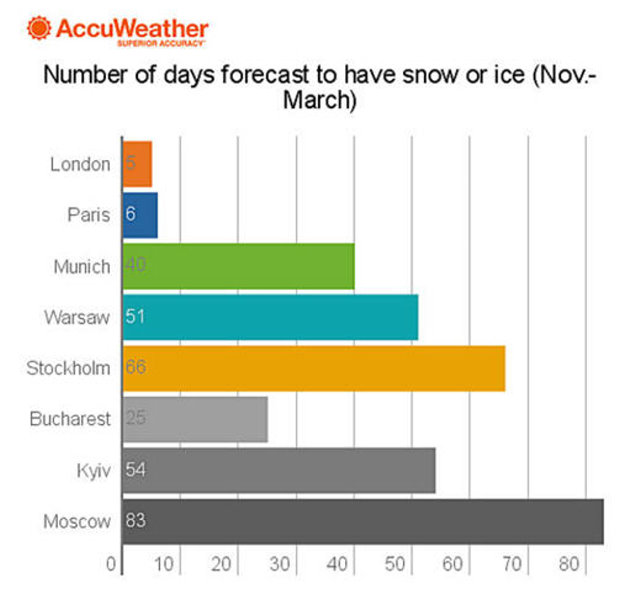 While northern Spain will experience an increase in rainfall late in the winter, the rest of Spain and Portugal are expected to receive near- to below-normal rainfall for the winter season.

Following a hot, dry summer, which featured significant wildfires, little or no drought relief will occur across most of the Iberian Peninsula.

“Another mild and dry winter for the majority of Spain and Portugal will put more stress on crops for the upcoming year as drought conditions continue,” Reppert said.

Prolonged periods of dry weather are also expected across the Balkan Peninsula.

Following deadly flooding that struck parts of the Balkans in August, a drier-than-normal winter with significant warmth is expected.

Storm systems that do impact the region will generally be weak and no widespread flooding is expected.

Snowfall will be below normal in the Dinaric Alps, Balkan Mountains and Carpathian Mountains.

Few or no extended periods of below-normal temperatures are expected as high pressure shields the region from arctic air.

A few late-season cold fronts could cause temperatures to fall closer to normal for a time; however, overall temperatures will be much above normal levels throughout the season.

Areas from Slovakia and Ukraine northward into the Baltic states will have to contend with arctic cold this winter.

Riga, Latvia; Vilnius, Lithuania; Minsk, Belarus; and Kiev, Ukraine, are most likely to experience a period of frigid air.

Late-season cold fronts will usher in much cooler air following a very mild first half of the season.

The mild start to the winter will make these late-season cold spells feel even more intense. The cold air masses will bring also the threat for snow.

“There will be increased chances for snow during the second half of the season in these areas. However, long lasting snow cover is not expected,” Roys said.