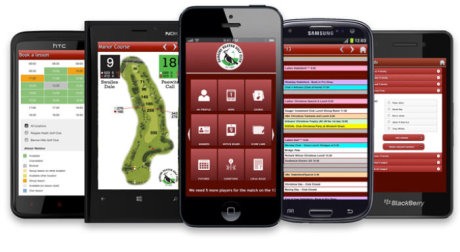 Charles de Haan writes: Hanging Heaton GC in West Yorkshire has recently installed the market-leading Eagle club members’ app, and Honorary Secretary Ken Woolford thinks it’s the perfect vehicle for telling his members everything they want to know. “I love it. It’s been incredibly well received,” he said, “and a lot of other clubs in the region are now asking me about the Eagle app.”

Ken’s one of a growing group of club managers thinking this way. 130 other clubs have now installed the app, and with Eagle signing them up at the rate of one a day, many more golf clubs are in the process of coming on board.

Ken’s approach to club management and membership communications is progressive and highly effective: “The members need to know everything. I send them the copies of the committee meeting reports, I send them 3-4 e-mails a week whenever necessary or appropriate about events, but the app is so much better for the type of things they want to know about. I’m here to provide and deliver the best service I can, and the Eagle app helps me do that in spades. The more the members feel better informed, the easier it is to get things done.”

An ex-Army man who knows a thing or two about effective communications and managing people, Ken explains why Hanging Heaton GC got the app. “When I took on the role of Honorary Secretary two years ago, we had no way of keeping the members informed. No diary, very few e-mail addresses, just words on paper on the noticeboard, which of course is the best place to keep a secret!”

“In 2013 we introduced the club’s first diary, but that was out of date as soon as it was printed with rule changes, new members joining and some leaving, fixtures’ dates changing, and so on. Then we saw the articles in Golf Business News and Golf Club Management magazine, and met Eagle’s northern sales manager Dean Poynter at a GCMA event, but while I could see it was exactly what the club needed, I had to get the committee on board first!”

“That was quite a laborious process, and not all of them ‘got’ the idea of the way modern lifestyles have changed. But as we all now know, 2013 was the year the UK went mobile, according to the national press and the major retailers, and besides which the committee soon understood the benefit of saving at least 50% of the cost of the printed diaries by getting our online members to switch to the app’s online one, effectively making the app a nil cost to the club!”

“So I got the go ahead, installed the Eagle app, and it’s gone down terrifically well with the members. Of our 300 strong membership, over 50% have already downloaded it in just two weeks since we went live. We’re also getting a lot of interest from existing and potential sponsors, which will mean more income for the club.”

“I’ve driven all the content input so far, but over the next couple of months I’m setting up an editorial team so that those responsible for departments like the pro shop, catering and greenkeeping, and club sections like the Ladies, the Vets, and the Juniors can all add content – once it’s first been approved by me! – to the app’s Noticeboard, News, Team and Pro Shop features.”

Ken has also seen the rapid growth of not just smartphones but tablets like the iPad amongst his own membership as well, all of which is driving the need for clubs to get on board with the Eagle club members’ app, as he explains, “Those iPads and other tablets are being purchased by all sorts of people, some of them you’d least expect, often the older members. They love how easy some things become when you can do it online. Don’t we all! And to my way of thinking, that’s the whole point of the Eagle app.”