E-petition to reduce VAT to 5% for all UK sport 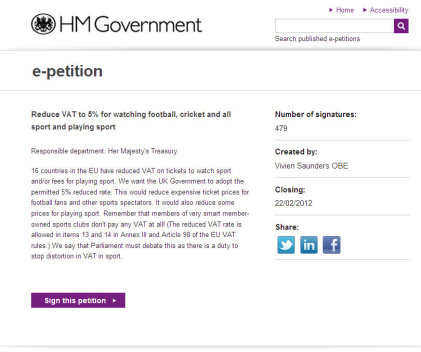 Vivien Saunders OBE, former British Women’s Open Golf Champion, has launched an e-petition on the Government website asking for a debate in Parliament to get a 5% reduced rate of VAT for playing and watching sport.

The e-petition is at http://epetitions.direct.gov.uk/petitions/12244

The European Union VAT rules allow a reduced rate of VAT for 18 types of goods and services. Two of these are admission to sports events and playing sport.

Sixteen other EU countries have adopted Reduced Rate VAT for sport since 2006 but successive UK Governments have failed to do so. The Reduced Rate varies from country to country. In the UK it is 5%.

A spokesman for the Association of Golf Course Owners (AGCO) states, “We need 100,000 e-signatures on the petition to force a debate in Parliament. Who would benefit? All sports fans paying for admission to major sports events – football, rugby and, of course, the Open Championship.

Vivien Saunders, Chairman AGCO, said: “In golf there has been a real distortion of the way golfers pay for their golf. Members of member-owned golf clubs have VAT exempt subs and don’t pay VAT. Golfers belonging to proprietary clubs or public courses pay an additional 20% VAT.

“We have been pressing successive Governments to stop this distortion, which we believe is probably illegal. This e-petition will force their hand if we can get the 100,000 signatures and a debate in Parliament.”

“We are getting huge support from proprietary golf clubs in Northern Ireland. There they not only have to compete with member-owned golf clubs with subscriptions exempt from VAT but also proprietary clubs in the Irish Republic where the reduced rate VAT of 9% applies. Now that is distortion!!

“It would be great if sports fans could publicise this as widely as possible on Twitter and Facebook,” she concluded. The petition will remain open for signature until 22 February 2012.