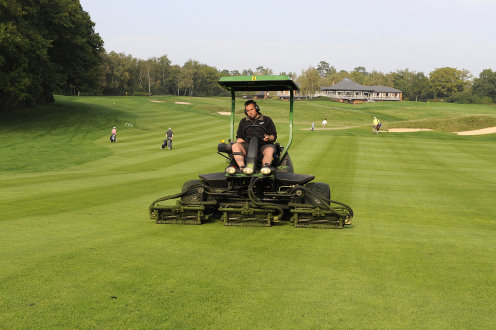 Current weather patterns have played havoc with mowing regimes and greenkeepers’ efforts to maintain high quality playing conditions for golf. After record rainfall for the UK in April, through May and early June there have been over 50% more days with rain than normal.

The only factor that has held grass growth in check has been the relatively cool soil conditions, but as temperatures start to rise over the coming weeks there will be a surge in growth, warns Syngenta Technical Manager, Dr Simon Watson. The challenge has been compounded for many with cutbacks in machinery and labour available for when conditions are suitable.

“It has been the almost relentless nature of this season’s rainfall that has caused most problems; the grass and the ground never gets a chance to dry out for a quick and clean cut,” he said. “On fairways, that’s resulted in clumps of wet clippings left on the surface and, in many instances, mower wheelings that affect ball carry and lie.”

Dr Watson also points out that when the cutting interval has been extended, subsequent mowing removes more leaf area than is desirable. This puts plants under greater stress, making them more susceptible to diseases and other damage. “With the current weather enforced extended cutting intervals, operators could be taking seven mm or more in a single cut to get fairways back in control. On a fairway routinely cut to 15 mm, that will remove more than 1/3rd of the leaf area, which is widely recognised as being detrimental to turf health.”

Furthermore, when turf plants grow more vertically between delayed cuts, the etiolated growth will adversely affect the density and quality of the turf surface. He added:  “We know that turf density on the fairways is one of the key factors for player satisfaction with fairway quality, which makes managing consistent turf height to encourage density even more important.”

Dr Watson advises a programme of Primo Maxx growth regulator on fairways can typically cut the mowing requirement by a third, and in some instances up to 50%. “That can provide essential flexibility in the mowing regime to cope with the current weather conditions, as well as reduce time, operating costs and wear and tear on mowers.

“Equally importantly, it can help to alleviate stress on the plants and improve turf density and quality, as well as to enhance playing quality, course appearance and consistent conditions for golfers.”

This season, the Primo Maxx Ultimate Fairway offer, in conjunction with Everris and available from all distributors, gives a more cost effective solution for a programme covering fairways across the whole course. There is also a chance for greenkeepers and clubs to assess the potential savings for their own club, with an on-line Primo Maxx Calculator on the free turf management website, GreenCast

Following the use of Primo Maxx on his fairways last summer, Andrew Laing, Group Head Greenkeeper of Little Lakes Leisure, reported that the turf growth rates at Gaudet Luce Golf Club had effectively been controlled, to a point whereby mowing had usually only been necessary once a week – which would previously have been unheard of on the site that he describes as a ‘grass factory’.

“We did notice a thicker sward and better water utilisation during the dry periods, which I can only attribute to the Primo Maxx,” said Mr Laing. “I can honestly say that, since using it, our fairways have literally been transformed.”

In Essex, Robert George, Course Manager at Thorndon Park Golf Club, manages 10 hectares of non-irrigated fairways. Last year he really appreciated the reduced mowing requirement and turf quality benefits delivered by Primo Maxx in preparation for a high-profile women’s tournament, held over six days in mid- September; he made the programme’s three applications of Primo Maxx in the three months running up to the event.

“I needed to enhance presentation and control growth patterns. Long after the event the programme continued to work and improve our fairways.” He added that the more the weather conditions suited grass growth, the better the programme appeared to boost recovery and aesthetics.

Dr Watson warns that the heavy rainfall and waterlogged soils will also have seen essential soil nutrients washed away. As turf plants start to grow vigorously in warmer conditions, there is a serious risk of deficiency and stress on plant health.

“As temperatures rise we typically see an increase in levels of Anthracnose attack, which we know is closely linked to plant stress and especially nutrient deficiency,” he said. “I always advocate including a quality liquid feed tank-mixed with each Primo Maxx application, which encourages healthy turf density and plant vigour.”

The Primo Maxx Fairway offer includes 40 litres of Primo Maxx and 36 x 15kg bags of Sportsmaster WSF fertilizer, along with a set of Syngenta Turf nozzles to assure accurate application and making it a viable option for all clubs.