On Saturday (14th July) forty-two club golfers competed in the second playing of The R&A’s 9 Hole Championship Final at Carnoustie. The Final was contested over the first four and last five holes of the Championship Course at the famous Angus links before The 147th Open. 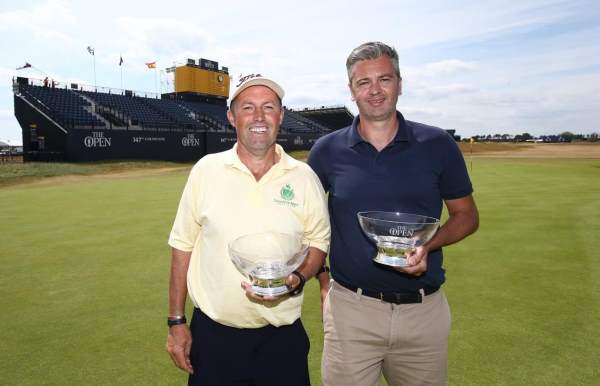 Christopher Cudahy and Andrew Sabin (pictured) of Tadmarton Heath in Banbury, England were the overall winners of the Stableford competition. The pair returned a winning nett aggregate score of 41 to be crowned champions.

Champion Golfer Paul Lawrie, together with Bruce Mitchell, Captain of The Royal and Ancient Golf Club of St Andrews, presented the prizes to the leading teams.

“To play Carnoustie in its best condition just before The Open was a real privilege and it was exciting, thrilling golf”, said Cudahy. “It feels brilliant to have won the Final and it was a great experience.

“We were playing just ahead of Adam Scott and Rory McIlroy, who were practising on the course, so we felt like we were really part of The Open. The R&A have done a great job and I am sure the nine hole event will go from strength to strength.”

Sabin added, “When you stand on the 1st tee and they call your name out, with all the grandstands around you, it raises the hairs on the back of your neck. It’s a nerve-wracking but fantastic experience. I will remember it for years to come.”

Over 15,000 golfers entered nine hole qualifying events held at clubs throughout Great Britain and Ireland; more than double the number who played in 2017.

The R&A 9 Hole Championship is central to the organisation’s drive to promote this form of golf as an ideal way to enjoy playing the sport in less time, either recreationally or competitively for handicap purposes.

Duncan Weir, Executive Director – Golf Development at The R&A said, “The finalists have had a great experience today and they revelled in the challenge of playing one of the world’s most famous courses. We are already looking forward to repeating this exercise at Royal Portrush in 2019.”