‘Best Ever Spectator Experience’ at The Open 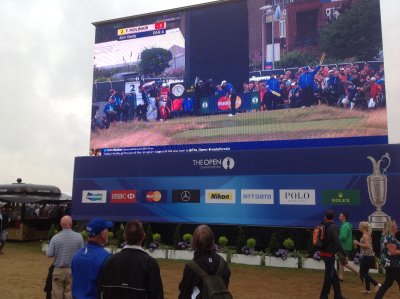 Speaking at the pre-Championship press conference last Wednesday Peter Unsworth, the new chairman of the R&A Championship Committee, said: “The experience for our spectators will, I believe, be the best they have ever received. Using their own smart phones and tablets and our groundbreaking Wi-Fi network, which is available in every grandstand, they will be able to enjoy life BBC television and radio coverage, live scoring, and get news and updates without leaving their seat.

“Couple that with the LED leaderboards on holes 1 to 17, the information available to our spectators has never been so readily available. We have built integrated viewing platforms or 8th, 15th, 17th and 18th stands for disabled spectators offering the best possible viewing experience, another first this year.”

In response to a question about the R&A having concerns that, with grandstands full of people watching pictures on their phones, the reaction to TV images could detract from the player in front of them, Chief Executive Peter Dawson said: “We did debate this at great length, as you could imagine. The great thing about coming to The Open Championship is that you can watch these wonderful players live in front of you and get the atmosphere of the event.

“The drawback always of watching live golf is that you can’t see what’s going on elsewhere on the golf course. And we think it’s a very powerful player enhancement that we’ve introduced the greenside electronic boards, scoreboards and information boards, and that we have The Open app. and we have installed a Wi-Fi network around the golf course, which will allow spectators to watch what’s going on, if you like, elsewhere on the course, be fully informed what’s going on, while at the same time watching the player in front of them. I think that is a massive step forward in golf spectating. 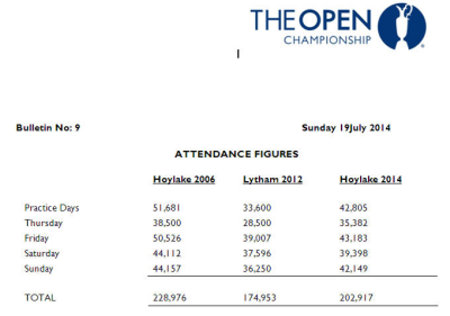 “However, the issue of how responsibly that is used is very important. I’m very confident that the golf fans will understand that they mustn’t disturb the players in front of them. It’s something we’ve discussed. But I think in the modern era, the way that people now embrace this technology is something that golf also has to embrace. And that’s exactly what we’re doing. And I think the spectators are going to feel a great benefit this year.”

Final attendance figures show that  202,917 attended this year compared with 228,976 when the Championship was last held at Hoylake. The Open www.theopen.com