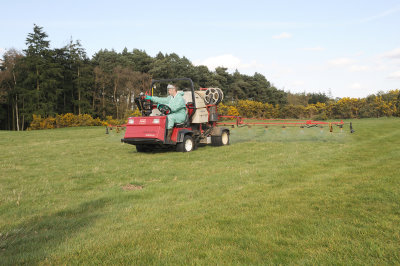 Good autumn growing conditions now give greenkeepers and course managers an opportunity to tackle the thick rough that has been the bane of every golfers’ game this season. The incredibly wet conditions encouraged excessive coarse grass growth and prevented mowing, which has resulted in almost unplayable conditions on many golf courses.

However, the good news is that the wet, warm soils and vigorous growth are ideal conditions for Rescue herbicide treatment, to selectively remove ryegrass and create a more open sward of fine Fescue grass species, according to Syngenta Technical Manager, Dr Simon Watson. The conditions will also help with over sowing or reseeding rough areas with fine Fescue grass species, he added.

“Selectively removing the thick, coarse Ryegrasses now can significantly enhance playing conditions for next season. Autumn treatments, as the grass is dying back naturally, have the minimum visual impact on the course. Where over sowing is used, the new Fescue grasses will establish for next spring to fill any gaps.”

When over seeding dense rough with a high proportion of Ryegrass, it is preferable to wait until the coarse grasses have started to die back from the Rescue treatment, he advised. The aim is to reduce competition and open the sward that will allow new seedlings to establish.

Dr Watson advocates that over sowing with Fescue species will create a faster transition to fine, wispy rough. “Fescue dominated rough can be more effectively managed, with lighter annual cutting and less trimmings to remove – further reducing the fertility and creating a more sustainable, low-cost sward.

“If Ryegrass does begin to re-infest the sward, it can be quickly and easily removed with Rescue in spring or autumn,” he added.

Dr Watson advises that Rescue can be applied at the rate of 1.33 l/ha from May through to the end of September, but must then be reduced to 1.0 l/ha for later autumn or early spring applications.

Sprayer operators treating deep rough must remember to raise the boom height of the sprayer to maintain even coverage on taller leaves. The optimum is to spray at 50cm nozzle height above the spray target zone, advised Dr Watson.

With a foliar application, using a systemic herbicide active that will be drawn down into the plant, it is essential to retain as much spray on the leaf surface as possible. Spraying in the minimum water volume of 250 l/ha will reduce the risk of over wetting leaves and optimise retention, whilst increasing sprayer output per fill.

The extremely difficult playing conditions caused by dense rough will make players and club management more receptive to initiatives to tackle the issues, and to support investment in improvements.

The Syngenta Golf Player Survey revealed that thick, coarse rough is the number one complaint among golfers. Over 50% of golfers were dissatisfied with the state of thick rough, with over 70% stating ease of ball location as a high priority.

Loch Lomond Golf Club Course Estate Manager, David Cole, reported some of the rough areas had got out of control. But initiatives to thin out these rough areas and bring back the original Fescue dominant swards are now paying dividends. The targeted use of Rescue in areas where coarse grasses have dominated, along with Primo Maxx used to suppress growth from competing grasses, have favoured the Fescues.

Mr Cole added that repeated over seeding and the installation of drainage in the rough areas, along with applications of appropriate fertiliser and iron, have also helped. “We are getting back to rough areas that can be used to define the design of the course, without impinging on the players’ game too severely. It all looks better and is playing better.”

At the London Club in Kent, Course Manager, Peter Todd, commented that the club is keen to adopt new technology and agronomy techniques that can enhance the efficiency of turf management and the quality of playing conditions. He highlighted that Rescue treatments have proved extremely successful in managing coarse grass invasion in the rough – a legacy of the site’s agricultural origins.

After years of conventional agronomy measures to cut, scarify and remove the coarse grasses, introducing Rescue as part of the control programme has enabled a faster reversion to the desirable fine grass species.

“It’s all about playability,” said Mr Todd. “The aim was to eradicate the coarse grasses and produce less dense, tall rough, which would still penalise wayward shots, but at least enabled players to find their ball and keep moving.

“Dense, thick rough is frustrating for golfers and slows up play, which ultimately has an adverse effect on the bottom line. Green clumps of coarse grass also spoil the visually attractive golden brown colour and wispy seed heads. Creating the desirable thin rough is far better for the players, and for the effective long-term management of the course.”

For turf specific agronomy and product information from Syngenta go to www.greencast.co.uk