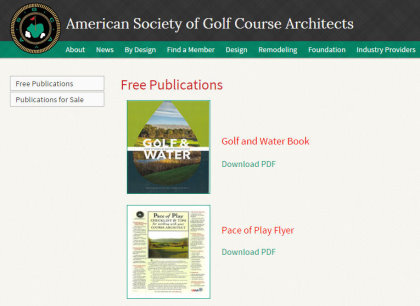 Those attending the American Society of Golf Course Architects (ASGCA) Forum at the recent Golf Industry Show in San Diego, came away with a greater understanding of the work done by ASGCA members, especially regarding the creative process that goes into their projects in North America and around the world.

President Steve Smyers, ASGCA, reminded the crowd of more than 200 industry leaders that innovation has been a part of golf course design from the game’s earliest days, crediting it for much of the game’s growth.

“The most successful and recognized architects of past generations were very forward-thinking guys, and the founding members of ASGCA were leaders in the game because they adapted to the modern innovation of the game,” he said. “We must do the same. Some of the courses I designed early in my career are modernizing for the next generation of players, with new sand or bunker liners, improved irrigation and introduction of new turf grasses.”

Smyers was joined by several ASGCA members who provided specific examples of how design advancements have helped meet the needs of players.

Information on these and other topics can be found at www.asgca.org/free-publications or connect with an ASCGA member at www.asgca.com/members