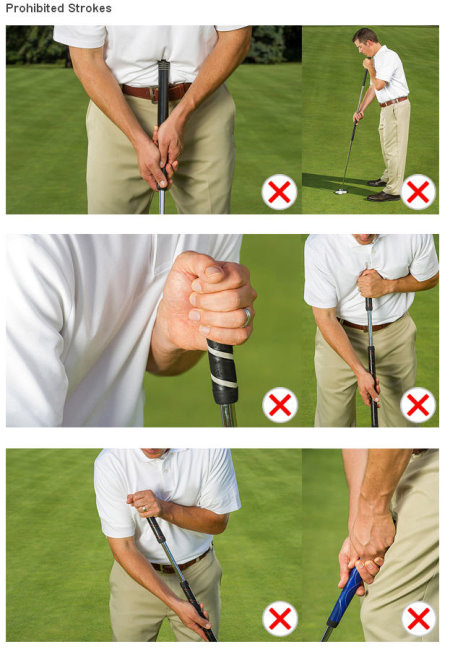 At concurrent press conferences at Wentworth in Surrey and Far Hills in New Jersey the R&A and the United States Golf Association (USGA), golf’s governing bodies, have announced the adoption of Rule 14-1b of the Rules of Golf that prohibits anchoring the club in making a stroke. The new Rule will take effect on 1 January 2016 in accordance with the regular four-year cycle for changes to the Rules of Golf.

Rule 14-1b, which was proposed on 28 November 2012, has now been given final approval by The R&A and the USGA following an extensive review by both organisations. The decision to adopt the new Rule came after a comprehensive process in which comments and suggestions from across the golf community were collected and thoroughly considered.

The R&A and the USGA have prepared a 30 page detailed report to explain the reasons for the decision to adopt Rule 14-1b. The report explains the principles on which the Rules of Golf are founded, why freely swinging the entire club is the essence of the traditional method of stroke, and why anchoring is a substantially different form of stroke that may alter and diminish the fundamental challenges of the game.

It points out that the Rule will still allow the use of belly-length and long putters and that a wide variety of types of strokes remain for players to use. The report concludes that the new Rule should not adversely affect participation in the game, that it is not too late or unfair to require players to comply with it and that it will remove concerns about any potential advantage that anchoring provides. It also makes clear that one set of Rules is essential to the future health of the game.

The report, entitled Explanation of Decision to Adopt Rule 14-1b of the Rules of Golf, can be found at www.RandA.org/anchoring or at www.usga.org/anchoring.

Peter Dawson, Chief Executive of The R&A said: “We took a great deal of time to consider this issue and received a variety of contributions from individuals and organisations at all levels of the game. The report published today gives a comprehensive account of the reasons for taking the decision to adopt the new Rule and addresses the concerns that have been raised. We recognise this has been a divisive issue but after thorough consideration we remain convinced that this is the right decision for golf.”

“Having considered all of the input that we received, both before and after the proposed Rule was announced, our best judgment is that Rule 14-1b is necessary to preserve one of the important traditions and challenges of the game – that the player freely swing the entire club,” said USGA President Glen D. Nager. “The new Rule upholds the essential nature of the traditional method of stroke and eliminates the possible advantage that anchoring provides, ensuring that players of all skill levels face the same challenge inherent in the game of golf.”

The current Rule 14-1 of the Rules of Golf will be re-numbered as Rule 14-1a, and new Rule 14-1b will be established as follows:

14-1b Anchoring the Club

In making a stroke, the player must not anchor the club, either “directly” or by use of an “anchor point.”

Note 2: An “anchor point” exists when the player intentionally holds a forearm in contact with any part of his body to establish a gripping hand as a stable point around which the other hand may swing the club.

Rule 14-1b will not alter current equipment rules and allows for the continued use of all conforming golf clubs, including belly-length and long putters, provided such clubs are not anchored during a stroke. The new Rule narrowly targets only a few types of strokes, while preserving a golfer’s ability to play a wide variety of strokes in his or her individual style.

The 1 January 2016 timetable for implementation also provides an extended period in which golfers may, if necessary, adapt their method of stroke to the requirements of the new Rule.

David Rickman, Executive Director of Rules and Equipment Standards at The R&A, said: “This Rule change addresses the future and not the past. Everyone who has used an anchored stroke in the past, or who does so between now and 1 January 2016, will have played entirely within the Rules and their achievements will in no way be diminished.”

“The discussion around the Rule has been very helpful, and we appreciate that so many different perspectives were offered,” said USGA Executive Director Mike Davis. “We know that not everyone will agree with the new Rule, but it is our hope that all golfers will accept that this decision is reasoned and motivated by our best judgment in defining the sport and serving the best interests of the game.”

The attitude of golf equipment manufacturers was a topic that came up at both press conferences. Peter Dawson told the Wentworth meeting that there was no firm consensus either way – there had been opposition but also support – while, at Far Hills, Mike Davis said that those manufacturers who were concerned about the rule change were not questioning the principle of the change but rather whether this is the right time to do it or would this negatively affect participation.

On this latter suggestion David Rickman commented: “Firstly, there is no meaningful data to support the notion that anchoring plays any material role in driving participation rates.

“Secondly, challenges such as the expense of the game and the length of time it takes to play are the main factors that affect participation, rather than whether or not golfers can anchor their putters.”

During the 90‑day comment period, which ended on 28th February, opposition to the proposed rule change came from both the PGA Tour and the PGA of America and also the National Golf Course Owners Association. In contrast the European Tour, the LPGA, the Ladies European Tour, the PGA of Great Britain and Ireland and the PGAs of Europe were among those supporting the proposed rule.

For more information about the adopted Rule, including a demonstration video, photos, infographics, and a Guidance Document for Players and Officials, visit www.RandA.org/anchoring and www.usga.org/anchoring