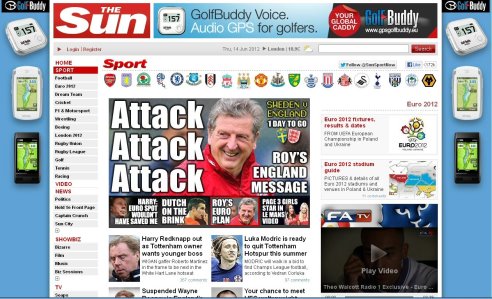 PMUK Ltd, one of the UK’s leading golf agencies, has implemented a special Euro 2012 campaign for two of its clients – targeted with finding new golfers from millions of football fans.

The Cambridgeshire-based agency secured pitchside advertising for two clients at Roy Hodgson’s first game in charge of the England football team less than a fortnight before Euro 2012.

Screened live on prime time ITV1 at 7.45pm with a viewing audience of over 10m, GolfBuddy GPS and Teetimes.co.uk featured animated key messages and branding on giant LCD screens running the entire length of the pitch for the friendly game in Oslo against Norway.

Then, on the eve of England’s second game at Euro 2012, the agency booked a take-over of one of the UK’s most heavily-visited websites – the sports homepage at www.thesun.co.uk – which also coincided with the start of the US Open.

The promotions, also backed up by radio advertising on TalkSport, form part of major advertising campaigns which have been created and planned by PMUK Ltd for each brand.

PMUK Creative Director, John Kelly, said: “One of our objectives this year for both Teetimes.co.uk and GolfBuddy has been to reach new golfers through new media channels.

“The campaign prior to and during Euro 2012 is designed to reach over 1 million golfers – many of whom won’t normally access traditional golf media like magazines and websites.

“Coupled with the extensive SkySports advertising which we’ve planned this year for both brands, we’re delivering extremely powerful and visual messages which are having a significant positive effect.”

GolfBuddy is the world’s leading developer of innovative golf GPS devices and this year became the first in Europe to launch a talking product, GolfBuddy Voice.

Teetimes.co.uk is the premier teetime booking website, owned by Online Teetimes Ltd, who in 2011 delivered over £300,000 a month in green fee revenues to UK and Irish golf clubs.

For the SkySports ad campaign for Teetimes.co.uk, PMUK scripted and designed a 20 second ad which was then produced by Leeds-based Active Pictures and VTR North.