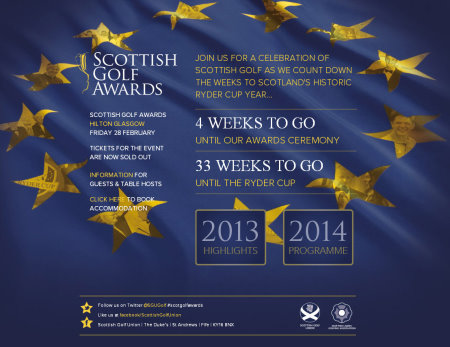 Four weeks before it tees-off the nation’s historic Ryder Cup year, the Scottish Golf Union has confirmed that the 2014 Scottish Golf Awards is a sell-out event.

An audience of 650 guests will gather at the Hilton Glasgow on Friday 28 February for one of the highlights of the golfing calendar, celebrating the successes of Scotland’s golfers at all levels of the game – concluding with a Lifetime Achievement Award for former Ryder Cup captain Bernard Gallacher, who follows in the footsteps of past recipients Colin Montgomerie, Paul Lawrie, Sam Torrance and Sandy Lyle.

Good causes within golf are set to benefit, with all proceeds from ticket sales, sponsorship and the auction going towards the new Scottish Golf Charitable Trust, which supports junior golf, education and environmental best practice.

The Scottish Golf Awards celebrates and looks back at the many highlights for the nation’s golfers over the past 12 months, from the leading Tour professionals to top amateur players, male and female, while recognising the efforts of those at the grassroots level with the presentation of the Junior and Volunteer of the Year Awards.

The evening will also look back on Scotland’s proudest Ryder Cup moments, before ending in deserving style for Gallacher. Hosted by broadcasters Dougie Donnelly and Caroline Henderson, it promises to be a fantastic occasion for all, one jointly organised by the Scottish Golf Union and the Scottish Ladies’ Golfing Association.

Gallacher – the eight-time Ryder Cup player and victorious skipper in 1995 – is sure of a night to remember alongside members of his family, especially given his recent health scare.

All proceeds from the ‘Long Putt Challenge’ on the night will go towards Gallacher’s defibrillator fundraising efforts, as he campaigns for the machine that saved his life last year to be made widely available at golf courses throughout Britain.

As well as former Scottish Ryder Cup players, guests will be able to mingle with celebrities from across the Scottish sporting spectrum while some of golf’s most iconic trophies will also be on display, including the Ryder Cup, Claret Jug and Solheim Cup.

Ross Duncan, SGU sponsorship and marketing manager, said: “We’re delighted golf fans will again be turning out in such great numbers for the 2014 Scottish Golf Awards, which has really increased over the last few years.

“It’s a very special year for golf in Scotland and that’s reflected in our sell-out figure of 650 guests, with all category sponsorships also sold. I’m sure everyone is looking forward to honouring Bernard Gallacher and all the winners on what will undoubtedly be a very special night.

“It’s great to bring people together from across all aspects of the game, reflecting the growing work of the SGU, SLGA and other partner organisations.”