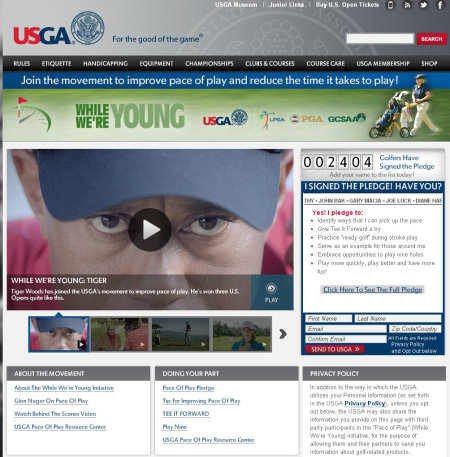 The United States Golf Association (USGA) has unveiled a new public education campaign around the theme of “While We’re Young,” a new positioning to raise awareness across the golf community of the challenges and solutions to the pace-of-play issues in the game of golf.

Borrowing the iconic line from the character played by Rodney Dangerfield in the classic 1980 film Caddyshack®, the campaign takes a light-hearted and comedic approach to encourage golfers of all skill levels and golf course facilities to join a movement to improve pace of play and reduce the time it takes to play the game.

According to industry research, the time that it takes to play golf is a principal driver that adversely impacts enjoyment of and discourages participation in the game. In a recent study by the National Golf Foundation (NGF), 91 percent of serious golfers are bothered by slow play and say it detracts from their golf experience; more than 70 percent believe pace of play has worsened over time; and half acknowledged that they walked off the course due to frustration over a marathon round of golf. USGA research shows that the golfer is just one component within a complex, integrated system that determines pace of play in the game. Golf course design, course setup and player management also contribute to longer playing times.

“Pace of play has become a strategic priority for the USGA, and part of a larger leadership agenda to address the issues that threaten the long-term health of the game,” said USGA President Glen D. Nager. “Our new campaign underscores a commitment to educate golfers and golf facility managers in a fun and engaging manner about all the factors that contribute to pace of play and the role they can have in implementing practical solutions to the problem.”

“Pace of play is a big issue. Rounds of golf take too long and no one enjoys it,” said Woods. “‘While we’re young’ is part of the golfing vocabulary, and Caddyshack is iconic in our sport. This campaign is light-hearted, but it also shows that we need to pick up the pace of play.”

“I think this campaign will have a huge impact with golfers because the message is fun,” said Creamer. “But the issue of slow play is serious, and in reality we all want to say, ‘Hey, while we’re young.’”

“We’re losing a lot of players because it takes too long to play, and it’s something we have to address,” said Harmon. “This campaign is going to have a great impact on the game. We made it a lot of fun, but slow play is not funny. It’s a serious issue and I hope the golfing public gets the message.”

The USGA campaign is being supported through its partnerships with the LPGA, The PGA of America, and the Golf Course Superintendents Association of America, who are lending the expertise of their members to develop content for the education program. The campaign also enjoys the support of state and regional golf associations throughout the country, which play a critical role in educating and engaging four million golfers at the local level.

The campaign will debut at the 2013 U.S. Open Championship, and will air throughout the summer on broadcast network and national cable channels during coverage of the 2013 U.S. Open, U.S. Women’s Open, U.S. Senior Open and U.S. Amateur on NBC, ESPN and Golf Channel. The TV spots will also run during broadcasts of non-USGA golf events, thanks to promotional support from the LPGA and The PGA of America.

Each PSA will direct people to www.usga.org/whilewereyoung, a newly created microsite where golfers and facility managers can sign a pledge to take personal measures to improve pace of play. Those who take the pledge will be enrolled in the USGA Pace of Play Education Program, which includes videos, quizzes and other resources that cover the fundamental causes and solutions to slow play from both a player and golf course facility perspective. Once the education program is completed, participants will receive a downloadable certificate acknowledging their role as a USGA-certified pace of play ambassador.

In addition to the campaign, the USGA has introduced a new online Pace of Play Resource Center on www.usga.org for golf facilities and players. The Resource Center serves as an authoritative repository for educational information about pace of play, including case studies and best practices on ways golf course facilities can address factors such as hole length, routing, green speeds, rough height, and operations to improve pace of play. The site also provides tips for individual golfers seeking to expand their knowledge of the issue and improve their own playing habits, including information on alternative formats like nine-hole rounds that take less time to play.

“Although our industry has tried to address pace of play for decades, we believe the issue can only be addressed successfully if we collaboratively pursue solutions that consider the full set of factors that influence pace – the actions of golfers, the ways we design and manage golf courses, and the influence of the elite competitive game,” said USGA Executive Director Mike Davis. “This new campaign illustrates the USGA’s energetic and action-oriented approach to pursuing worthwhile endeavours that serve the best interests of the game moving forward.”

The USGA campaign is part of a larger, multifaceted initiative that was announced in February 2013 to identify the causes and solutions regarding pace-of-play issues in the game. This USGA-led program includes: an analysis of key factors known to influence pace of play; the development of a pace-of-play model based on USGA-led research and quantifiable data; improvements to the USGA Pace Rating System; on-site assistance at golf courses to help managers assess and improve pace of play; and the creation of player- and facility-education programs.

In addition to broadcast network and cable television, the USGA campaign is being supported by an integrated mix of digital media, social media and public relations.

An integrated team of agencies, led by Jimmy Siegel Creative Services, ADDigital, Platinum Rye Talent and Dentino Marketing, worked with the USGA to develop the new campaign and microsite.