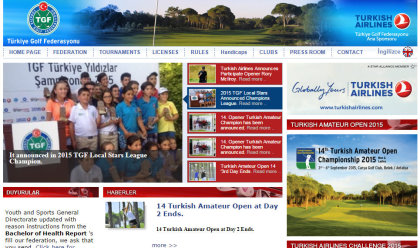 Golf has been spreading throughout Turkey since the foundation of the Istanbul Golf Club in 1895. The TGF (Turkish Golf Federation) have stepped things up in recent years, with the prestigious European Tour Final Series tournament the Turkish Airlines Open, which is now in its third year, having attracted the world’s best players to the country.

Former world number one Rory McIlroy will be the latest to tee it up at the Montgomerie Maxx Royal course in Belek between 29 October and 1 November.

But as well as that iconic tournament putting Turkish golf on the map, the grassroots game is growing quicker than ever before. That is being aided by the TGF’s pledge to waive green fees for Turkish citizens.

Chairman of the Turkish Golf Federation Ahmet Agaoglu said: “There is a traditional view that golf is only played by a certain section of society, that equipment and green fees price out normal people.

“We are changing that and fast. Golf is the greatest game on earth. We are showing the people of Turkey that it is accessible and they are trying it, and loving it, in their thousands.

“People flock from around the world to play our wonderful courses but we are proud and excited at the way Turkey is taking this wonderful sport to its heart.”