SNAG Training Rolls out in Russia 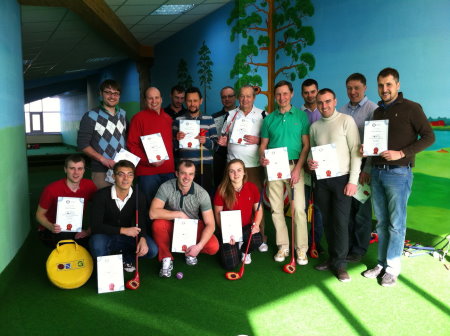 SNAG’s Master Trainer Tony Howarth has had a busy start to the year, with his most recent journey to Russia for a 2-day training course at the Moscow School of Golf.

Amongst those receiving the training organised by i-KAN GC and SNAG’s Russian distributor, Intergolf, were representatives of golf clubs, professional golf trainers and teachers of physical education from Moscow and other regions. In total, seventeen people were awarded their certificates on completion of the course. The course included understanding SNAG concepts, building SNAG courses, safety, and the important issues of the transition from SNAG to traditional golf equipment. Head of the project, Daniil Gubarev from Intergolf stated, “The main aim of introducing SNAG into Russia is to help develop the growing interest in golf and to bring the game to a wider audience. The next course is going to be held in the autumn and we are already looking forward to it.”

Prior to the training, Tony visited the Russian State University of Physical Education Sport, Youth and Tourism, where he was given a guided tour of their excellent indoor facilities by the Chair of Theory and Methodology of Golf, Aleksey Korolkov. The facilities are currently utilised by a very small number of professionals, but it is hoped in the coming months and years that the number of professional golfers will grow significantly. The next stop on the tour was the Lyceum 1575 school in Moscow. Here, Tony was questioned about SNAG and golf in general by staff and pupils before delivering a SNAG master class to a select group of youngsters. The school was one of the first in Moscow to introduce SNAG and has its’ own 18 hole mini golf course, chipping green and driving nets.